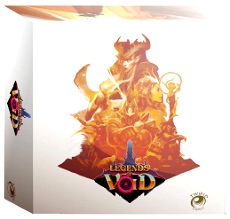 [demo version]
Solo
Two-Player
Free
16+
1-2
45m - 2h
8.5
153h
Legends of Void is a 1-4 player strategy game, based on hand-management, engine-building, and area-control mechanics. OVERVIEW You'll play a Hero leading a Faction in the battle against the Void. The Void has summoned Seraphs, god-like creatures who threaten the Outer Lands, draining its life ...

read more...
Legends of Void is a 1-4 player strategy game, based on hand-management, engine-building, and area-control mechanics.

OVERVIEW
You'll play a Hero leading a Faction in the battle against the Void. The Void has summoned Seraphs, god-like creatures who threaten the Outer Lands, draining its life and replacing it with Nihil.
You have a common goal: banish all the Seraphs from the Outer Lands. But you compete with each other to gain the favor of Lumen, the Flying City of the Eternals, rulers of all known lands.

HAND-MANAGEMENT
During the game, you will buy and cast Lumen scrolls, which have a variety of effects: conjuring animal familiars, gathering magical berries, evoking a fireball, stealing Gold from other players.
Scrolls can increase your production, grant unique actions, and empower your Hero. The game has 216 unique scrolls, and in addition to these, there are 45 Gift scrolls, which are awarded to Heroes during setup to empower and distinguish them even more.
Acquiring a Lumen scroll for your hand costs 3 Gold. Casting a scroll takes Gold, and sometimes additional resources and requirements.

ENGINE-BUILDING
There are nine types of resources:
• Gold, Mithril, Mana, and Hero resources. These can be directly produced.
• Dark Matter and Genasi, which descend from Mana.
• Creature, Spirit, and Artifact, which can only be present on specific scrolls.
Your basic income of Gold, as well as your base score, is based on your Lumen Rating. It starts at 13 and increases only when you damage a Seraph. You can damage a Seraph in many ways: fighting it directly with your Hero, sealing a Portal, scorching a Nihil, blooming a Vytae, or through actions granted by your Hero, Faction, and certain scrolls. Usually, to damage a Seraph, your Hero or one of your Areas must be near it.

AREA-CONTROL
The Outer Lands are a map made up of six Regions, randomly chosen from eight double-sided tiles. They form a disc with the Void at its center. The Seraphs threaten every Region. Here and there, Portals and Nihil infect the Lands. In a Stronghold on the edge of the map, you are preparing for the battle.

GAME FLOW
Legends of Void is split into years and seasons. In each year:
• Spring: you buy new Lumen Scrolls to expand your options.
• Summer: you take Actions, spending resources to counteract the Void and its Seraphs.
• Autumn: you generate more resources to pay for Scrolls and Actions next year.
• Winter: the Void stirs, and the Seraphs spread corruption across the Outer Lands.

ENDGAME
Legends of Void ends immediately when one of these happens:
• You banish all Seraphs, making the Outer Lands safe, and Lumen awards the winning Hero with the title of Legend.
• You reveal the last Event from the Void-Deck and run out of time. The Void probably erupts, swallowing everything. A Hero still wins, but the Outer Lands are doomed.
Endgame scoring depends on how the game ends. The Hero with the most Lumen Points wins.

Legends of Void is a board game for 1 to 4 players, age 14+. The average playtime is 45 minutes per player. Our estimated Complexity Rating is 3.6 (on the BGG scale, max 5.0).
We wanted to make a board game high in complexity and aesthetics, a strategy game settled in a fantasy world with a history behind it. 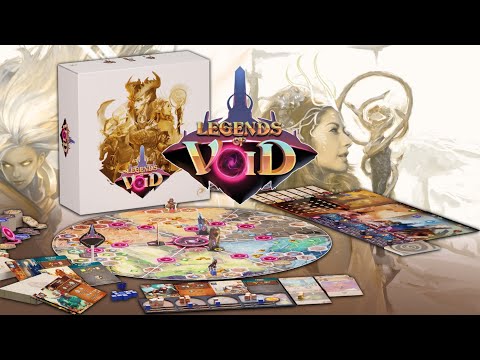 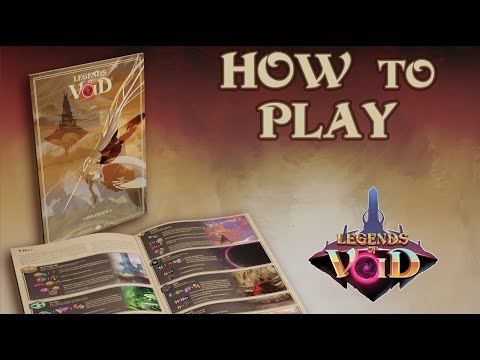 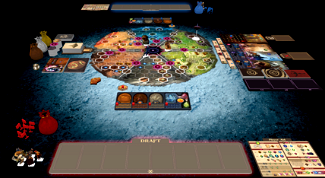 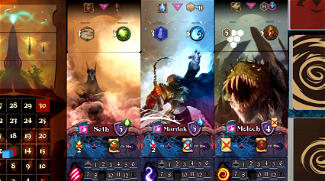