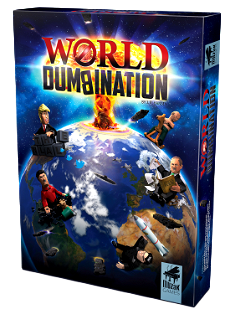 Crowdfunding
Two-Player
Free
16+
2-5
50m - 2h
7.4
148h
World Dumbination is a funny satirical war game for 2-5 players. You play as the five world leaders left on earth, after aliens have collected the intelligent people to inhabit their new and improved version of our planet! Each player has different starting points, as you can choose to play the ...

read more...
World Dumbination is a funny satirical war game for 2-5 players. You play as the five world leaders left on earth, after aliens have collected the intelligent people to inhabit their new and improved version of our planet!

Each player has different starting points, as you can choose to play the leader of the USA, Venezuela, Turkey, Russia – or, of course, North Korea!

The game board is a map of the world where players build military bases and move units. Cards are used for a whole range of actions, for yourself and your opponents. So in short the game is all about combining the best card actions with clever movement on the board!

Even if there are a lot of military leaders remaining, you need to build your military forces from scratch. Reaching your first goals makes you able to draw stronger cards. Each player has 2 first goals to choose from, and they are different for each nation.

Find the best strategy to move your units and build military bases (they decide the strength of your units). Interact and make deals with the other players through diplomacy or corruption.

Players choose and place cards to reveal them all at the same time. Play action and project cards that strengthen yourself, or play cards that weakens your opponents. While doing all this, you also have to watch out for your ego and popularity levels. With too little self-esteem you don’t dare to do any action. Too much Ego makes you crazy and focused on only one target; you have to almost be crazy to use the nuclear bomb!

If you get too unpopular, you as a leader can be overthrow by your own government. By getting very popular you get a bonus income.

There are geniuses (those who wouldn’t get on the spaceships) still hiding on earth. Finding one or two of them would also help you in your quest for world domination. You can also find things that the aliens left behind who will give you an advantage.

In case the players get too clever, there are Dumbness cards in the mix to make sure some kind of stupidity will take place. These cards can give you the Nobel Peace Prize, change targets for you actions, or change things in almost every possible way.

You win by having the most victory points in the end. You get points by building projects and bases, conquering new areas and become popular. The game ends when either a player has reached 15 victory points, or when 4 nuclear bombs are disarmed to make world peace!

This game is all about having fun around the table, weirdly it is quite fun to use dirty politics and engage in a nuclear war against the other players! 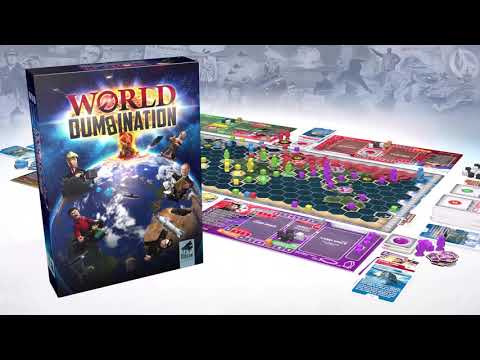 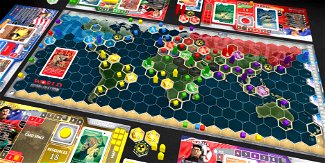 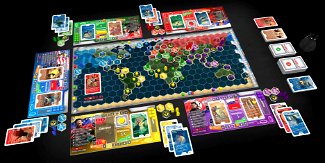 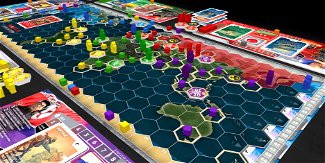 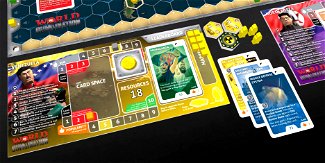