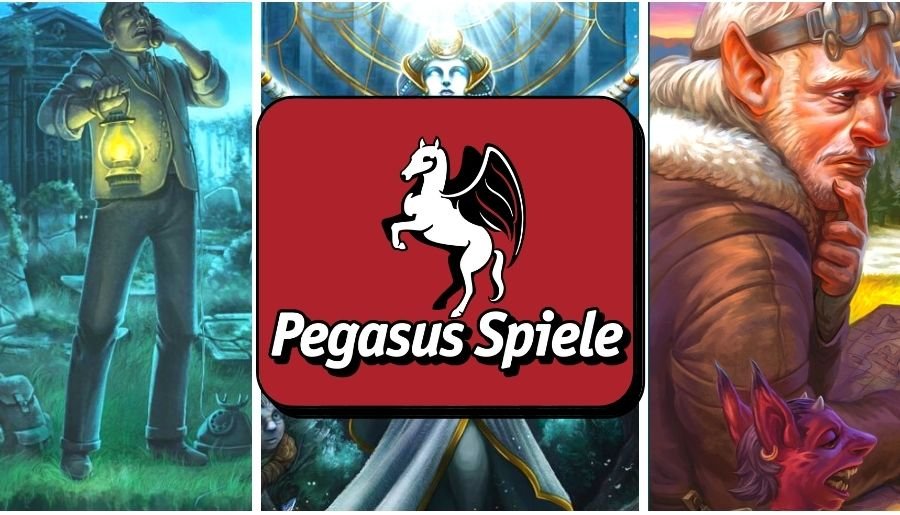 Pegasus Spiele have brought all their latest hits as well as some much-loved classics to Tabletopia, and there's so much to choose from! Play these games right now! 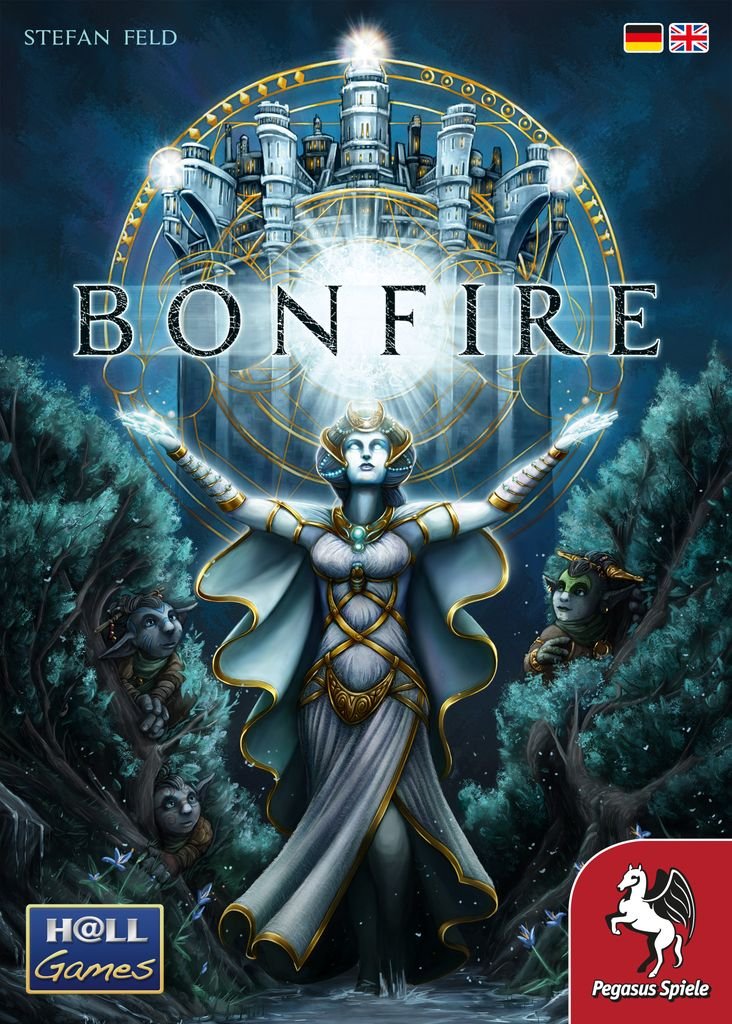 You are a group of gnomes living close to the cities and you also need and the light of the bonfires. Missing it now, you try yourself to visit the cities and learn how to ignite the bonfires once again: You must visit the guardians of light on their holy islands and ask for tasks to prove your good will. For each completed task, they will re-ignite one extinguished bonfire. Whoever manages to earn the greatest trust from the guardians and manages to brighten their city the most will win the game. 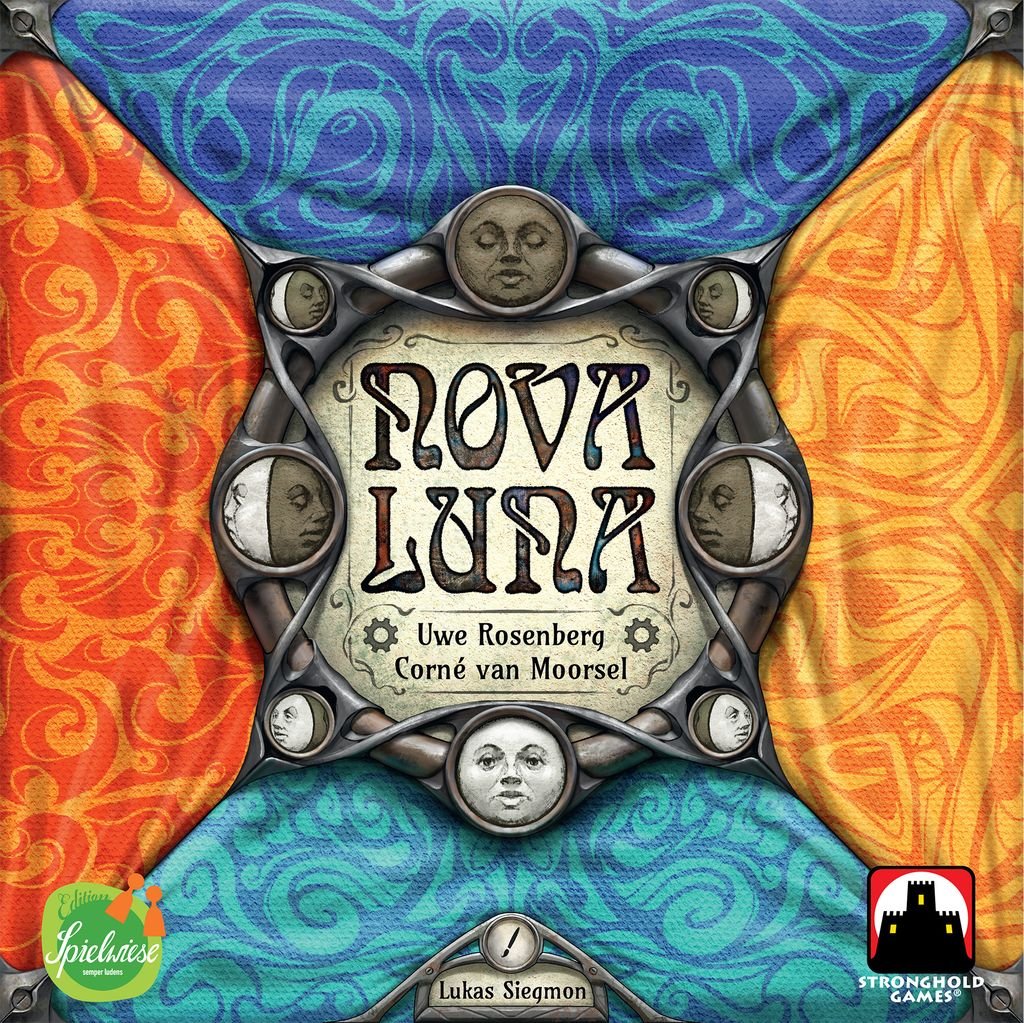 The new moon is a symbol for a new beginning, the perfect time to start something new and to plan your future — and that is what Nova Luna (lat. for new moon) is all about. In each round of this abstract tile-laying game, you have to plan your future anew, developing a new strategy to cope with what the moon wheel has to offer you.

On each turn, you have to decide which new tile from the moon wheel to place in front of you. Every new tile brings a new task you have to fulfill. In order to do so, you need to place tiles of the correct color adjacent to the task you want to complete, but these of course again bring you new tasks. Each time a task is solved, you may place one of your markers on it. So decide wisely and be the first one to place all your markers. 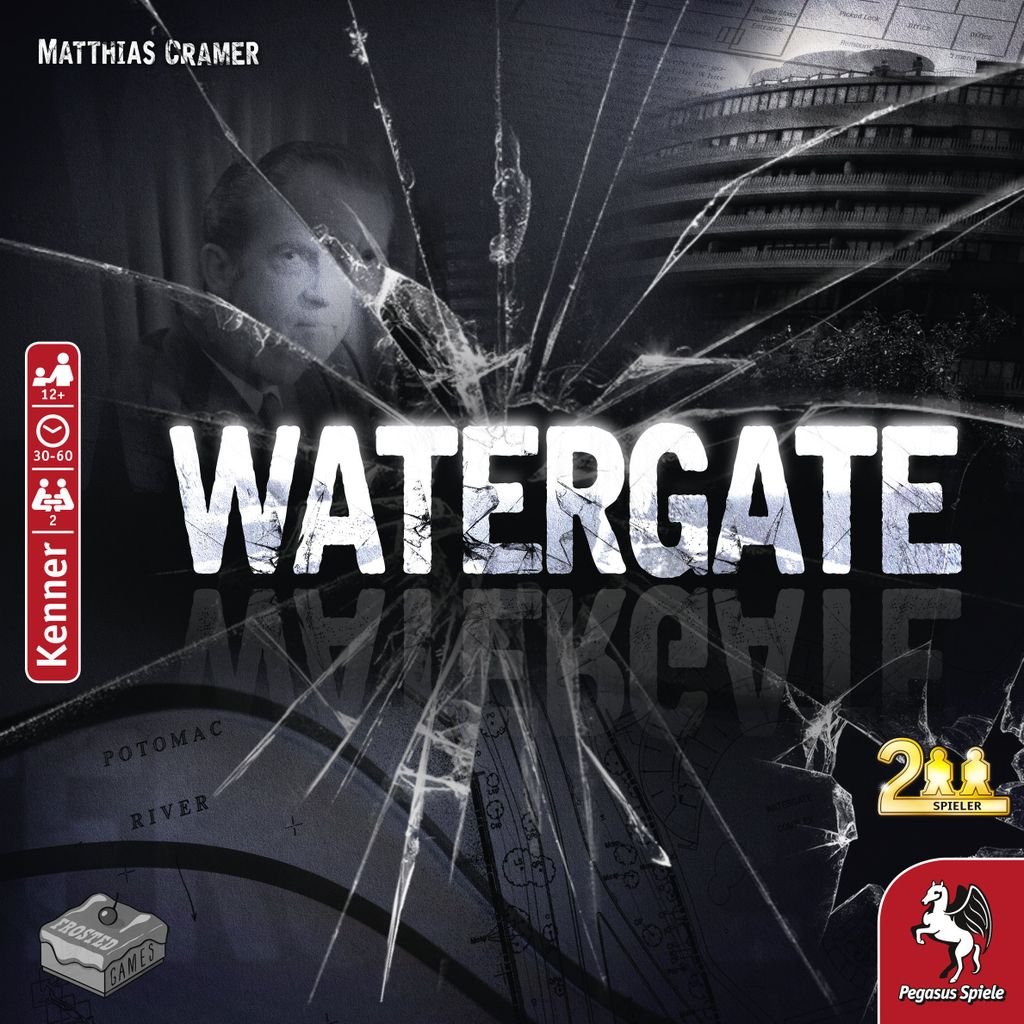 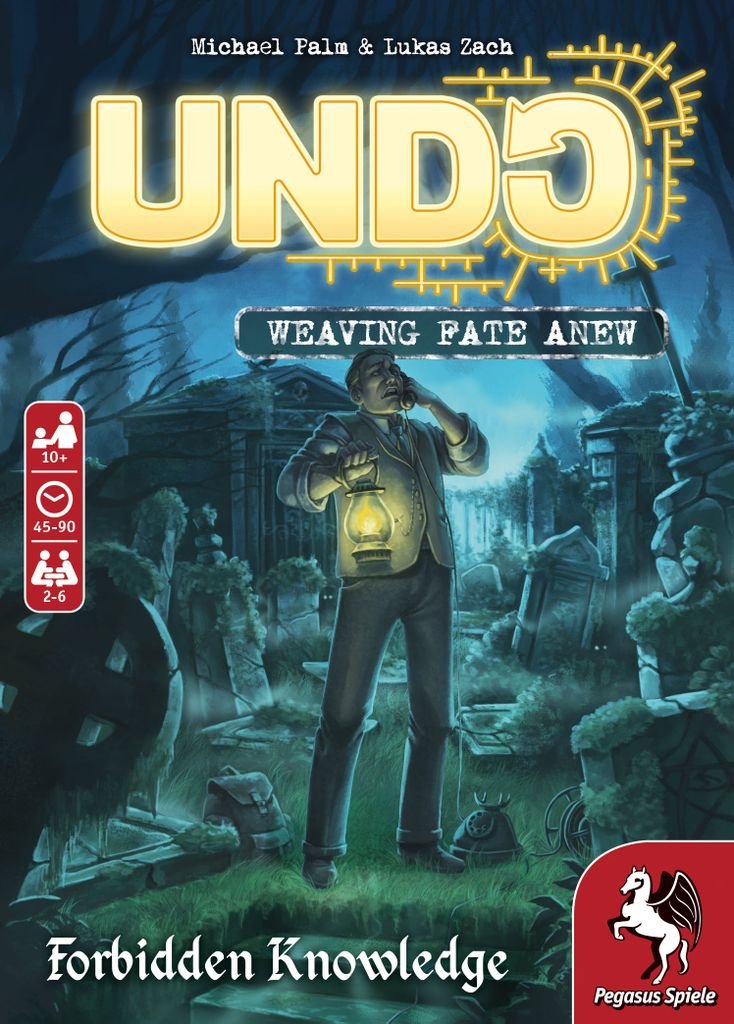 Cemetery in the swamp, July 1923: A man in his late twenties stands with a horrified face at an open crypt. The sparse light of his lantern shows a staircase leading down into the depths. Next to him are a backpack, a spade and a telephone, whose cable follows the stairs into the darkness. "Get lost! Get lost! Put the plate on it and PISS OFF", it roars panically from the receiver. "I won't let you down, Harley," he says in a trembling voice. As he does so, his gaze wanders to the heavy gravestone that has been pushed aside, "Do you hear me, Harley?", he shouts. A crack of the phone makes him pause. A muffled, rapt, gelatinous voice comes out, "Harley's dead, you fool." The man begins to laugh hysterically. To protect his own spirit, his heart fails and he falls lifeless to the ground.

With Forbidden Knowledge, another title appears in the innovative UNDO series of games. This time, players are transported into the fantastic world of H.P. Lovecraft. Together they decide in which order they will travel back to different points in the victim's life. In this way they gradually explore the background of death. Will they be able to prevent it? 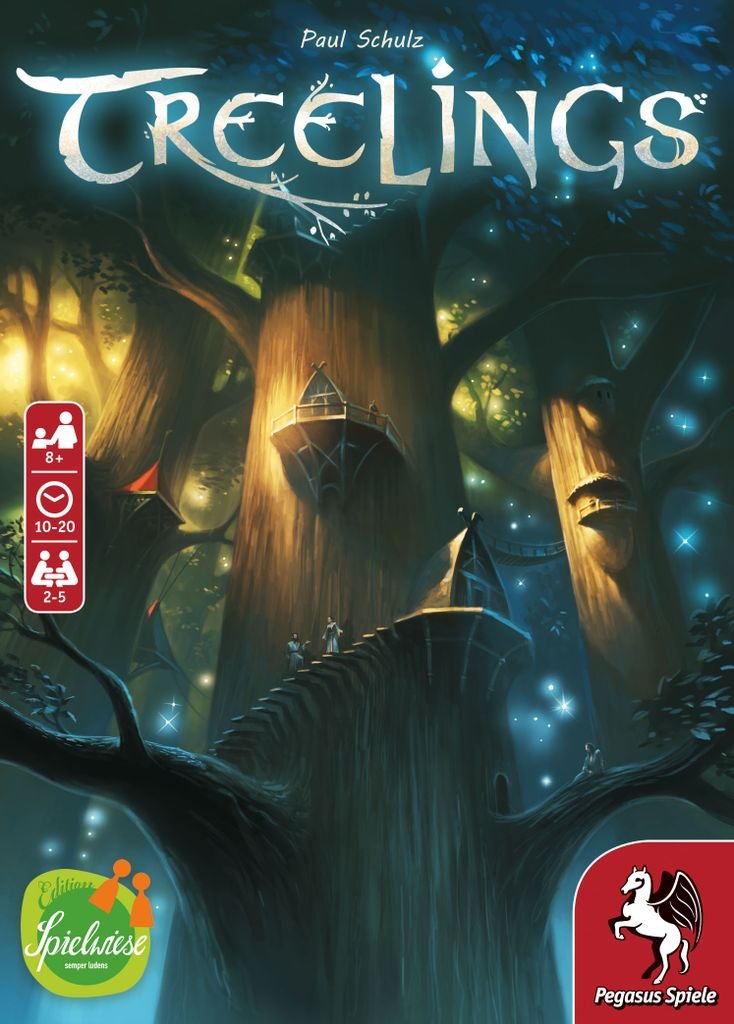 In the world of Treelings, construction is well and truly underway in preparation for the annual firefly festival! Beautiful, glowing swarms of fireflies may be released only from the highest towering platforms in the city during the upcoming summer solstice. Six different guilds reside in the city, and they will do everything possible to build their own tree as high as possible in each district. As chief of your district, each round you decide which guild you want to support in your part of the city as you want to lure the spectators to your show on festival day and to send as many brightly-glowing fireflies to freedom as possible. 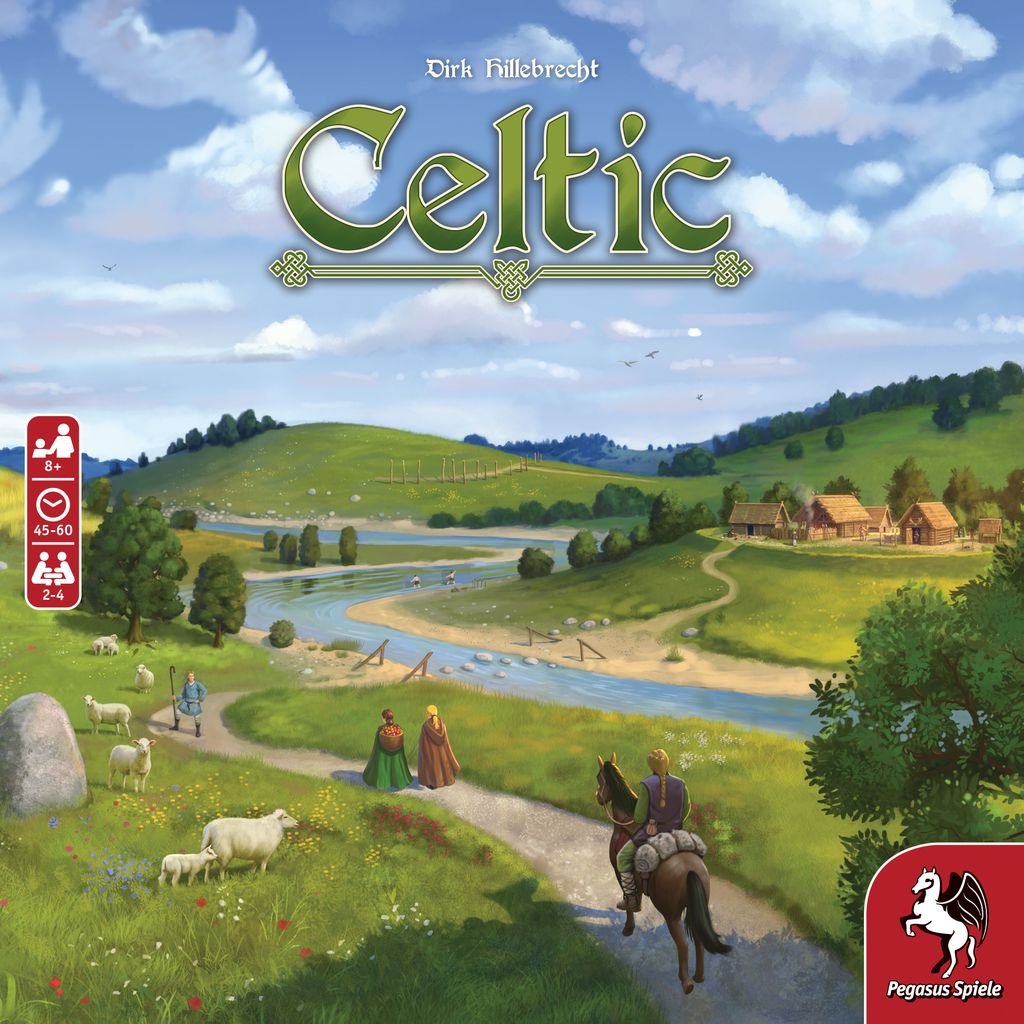 The Celtic Lord of the Wetterau is looking for a successor. To prove themselves worthy, players have to travel the region and trade with neighboring tribes. Each turn they have to perform one movement with their family members; other players at their starting location can decide to join them. While some locations allow players to collect goods, others have to be visited to fulfill goal cards which grant influence (victory points). The game ends immediately once a player has fulfilled five goal cards or chooses to reveal that they've collected one good of every kind. Players then tally up their points and the most influential Celt wins.

Celtic is an easily accessible family game for 2 to 4 players, ages 8 and up. Quick turns that allow inactive players to profit make for a light tactical game without downtime. 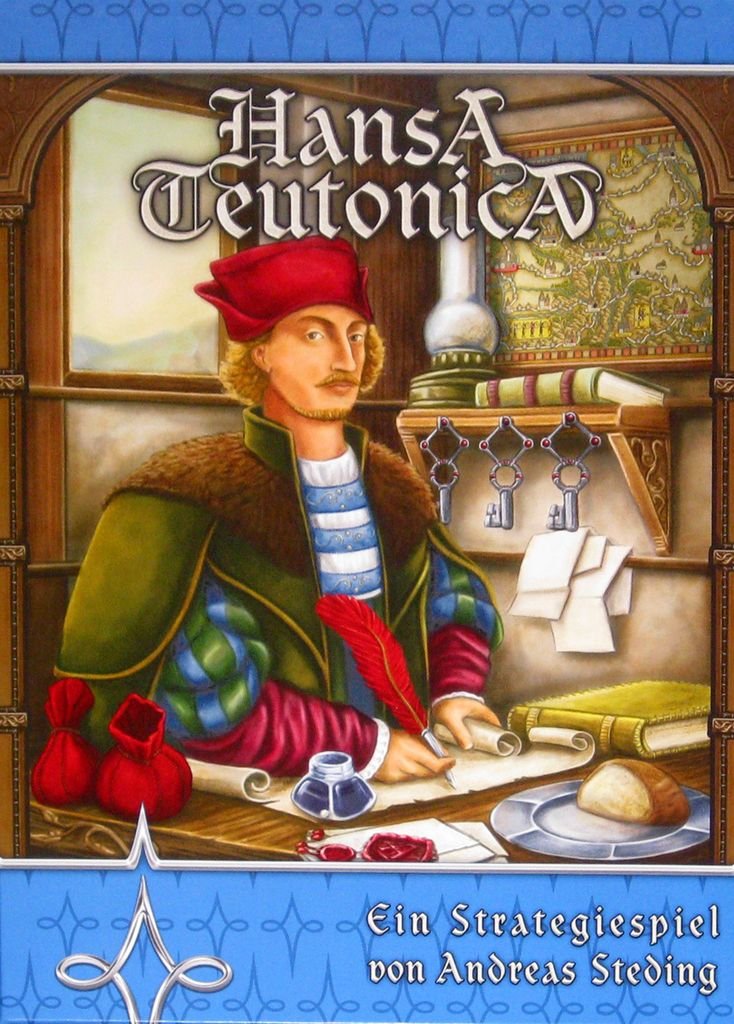 Deutsche Hanse or, in Latin, Hansa Teutonica, are alternative names for the Hanseatic League, an alliance between merchant guilds and (later) between cities originating from lower Germany. Cities that joined the League were called Hansa cities.

The League emerged in the midth of the 12th century without being explicitly founded and there was no formal apply for admission until the second half of the 14th century, so it is almost impossible to tell exactly which cities belonged to the league within this period, but altogether almost 200 cities were directly or indirectly involved.

Players attempt to increase their standing as merchants in the Hanseatic League by gaining prestige points. This may be done in different ways: Establishing a network of Kontors in new Hansa cities may be as promising as improving trading skills. 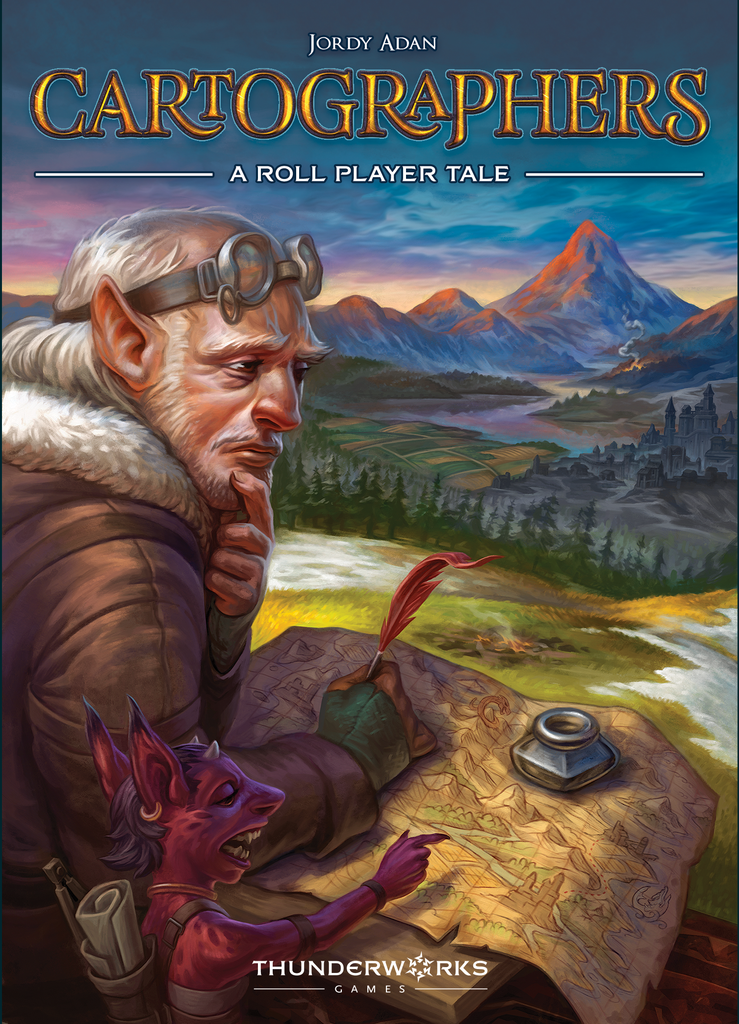 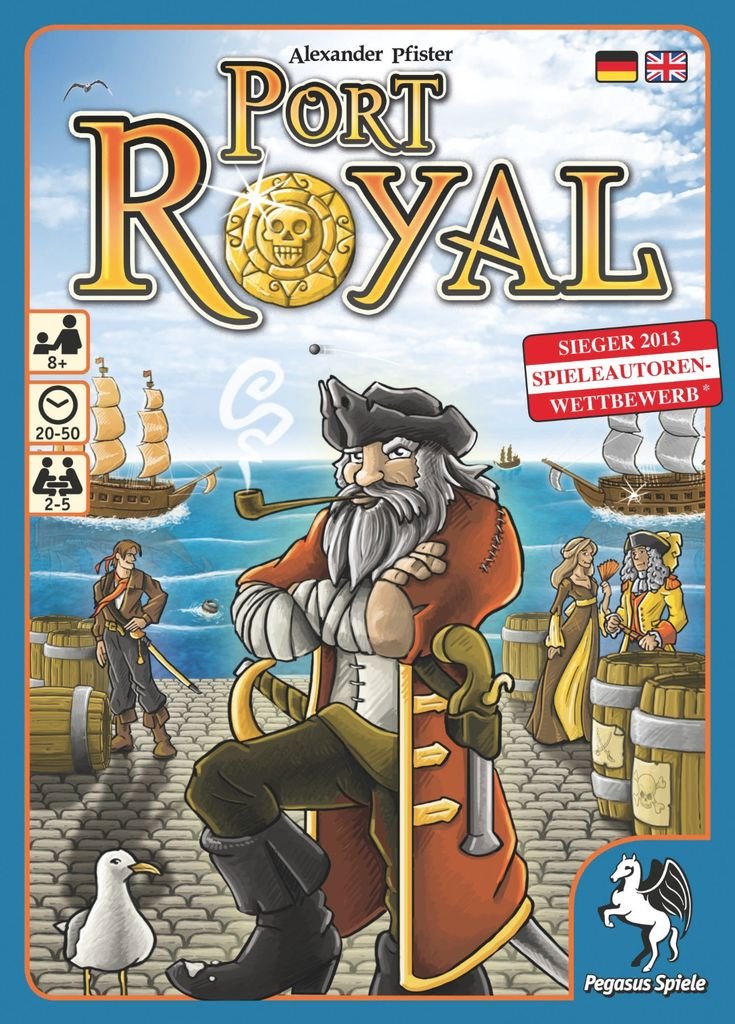 The merchant players in Port Royal, which won the Austrian Game Designers Competition under the title Händler der Karibik, are trying to earn as much as they can out of the Caribbean Sea, but if they set their goals too high, they might take home nothing for the day. 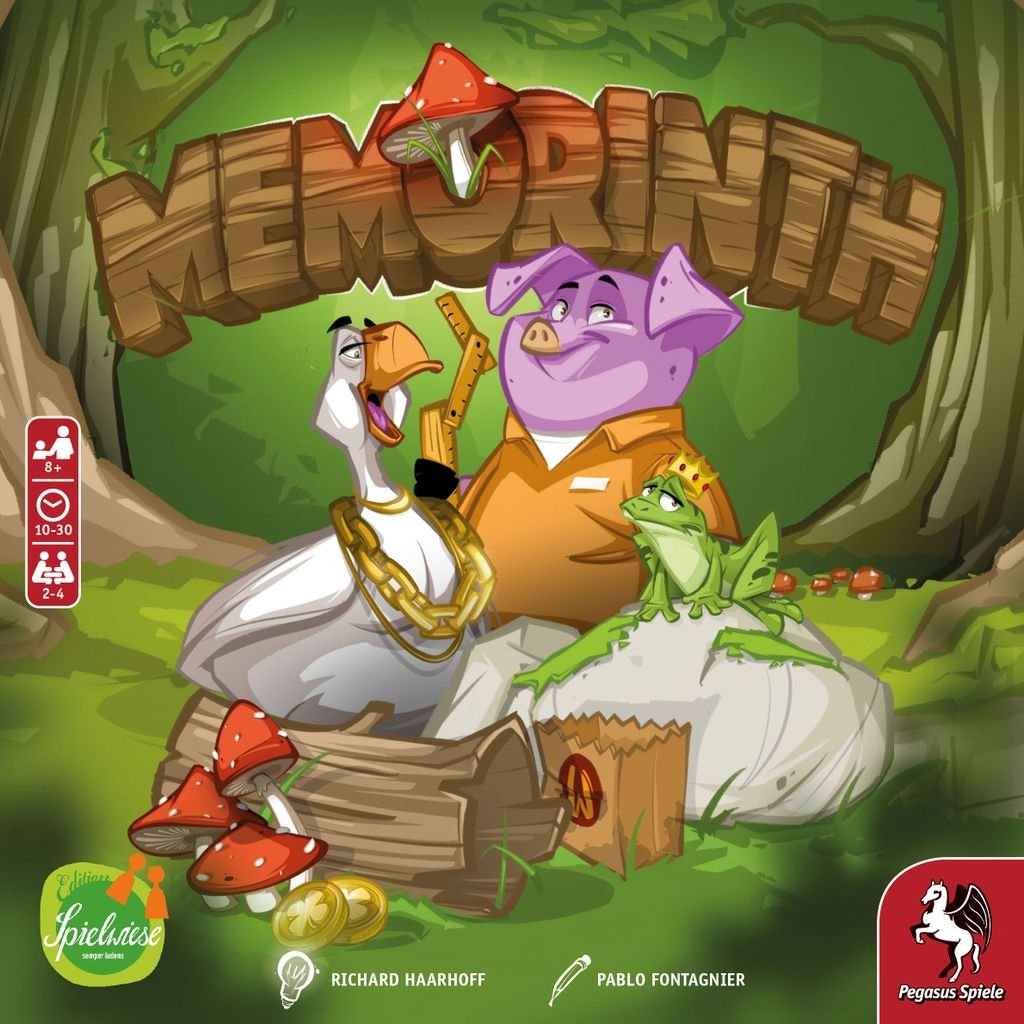 It's a beautiful spring day — the perfect weather for a walk in the forest! You put on your jacket, lace up your boots and set out.

The leaves rustle on the trees, and the sunlight shines through the branches. A gentle breeze blows as you take a deep breath of forest air. Lost in your thoughts, you turn once here and then again there, sometimes going left and sometimes turning right... Suddenly you hear something rustling behind you in the bushes. You take a few cautious steps towards the noise and discover...a goose?! And it's talking to a goblin? Then all of a sudden, your friends are standing next to you in the forest...

Umm. You decide it might best to head home quickly. There seems to be something wrong with this forest...

Which is the shortest way back? You're in luck as the fairy tale characters decide to show you, but your friends are constantly changing the path in Memorinth in their own attempts to get home the quickest. However, with a bit of luck and memory, you'll be the first to get out of the labyrinth! 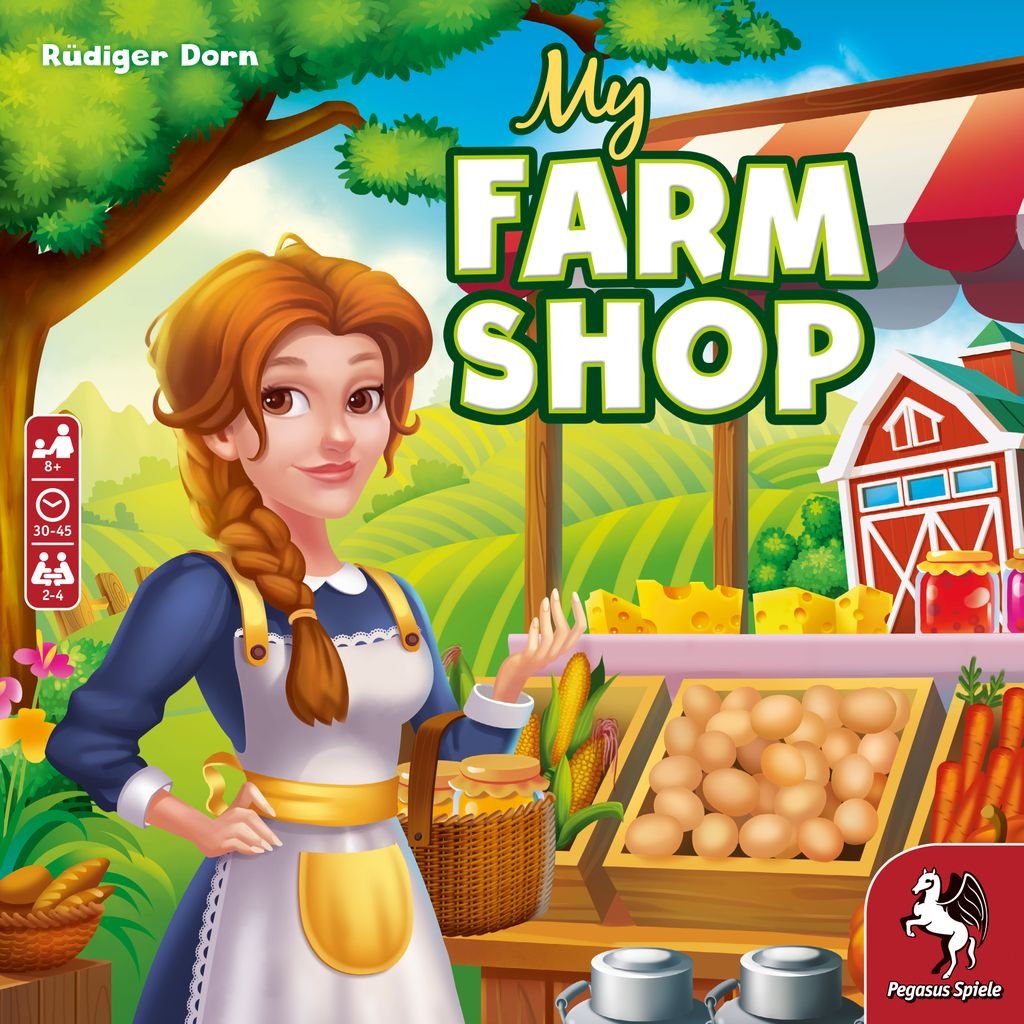 Growing food in your own garden, keeping livestock yourself — self-sufficiency is all the rage, but running an actual farm with a successful farm shop is a much bigger challenge than that.

In the family game My Farm Shop, players can live through that experience without leaving the house. Three dice are thrown on each turn. With one die, the active player selects a new expansion for their farm, and the combination of the other two dice dictates which field will be activated on the farm — not only for the active player, but for all others as well. The expansions enhance the actions that players use to milk cows, shear sheep, harvest honey, or collect eggs, and these raw materials can then be sold. In the end, whoever makes the most money wins. 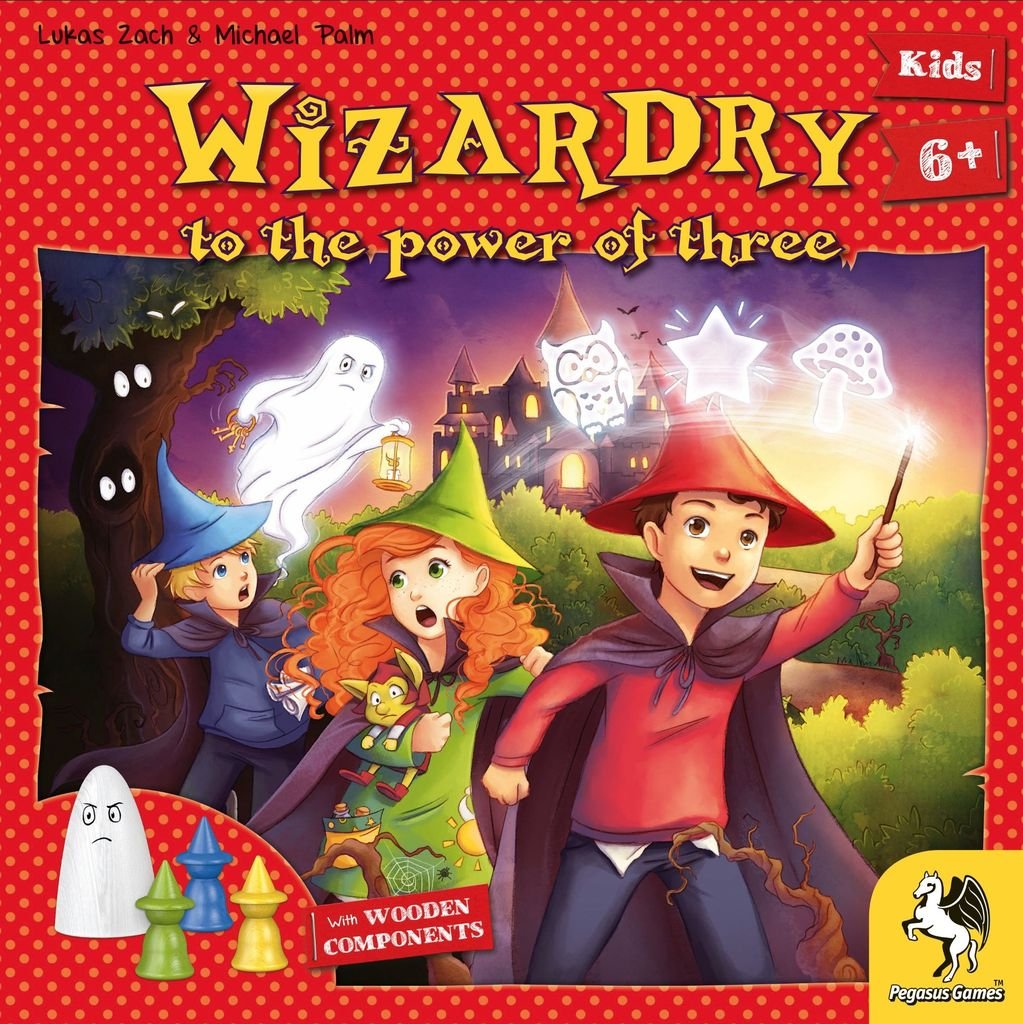 The wizard students are in trouble! It's long past bedtime, but they sneaked out of the wizards' school to visit the secret midnight market and see the flying brooms and talking cats they heard the grown-ups talk about. Unfortunately they don't get far for while crossing the forest near the wizards' school, Willy the Warden Ghost takes up their trail. Now they have to double back quickly or they are facing detention. But the forest is too dark to find the way back without help. Luckily they have an idea: The Lumies, magical glowing creatures that live in the forest, can light their way back to the school. The wizard students need to stick together to find the Lumies and make it back to the school before Willy catches one of them.

While escaping the Warden Ghost in Wizardry to the power of three, players need to work together, memorize the tree tiles, and use their magic potions and dice enchantments at the right time to make it back without being caught and win as a team. 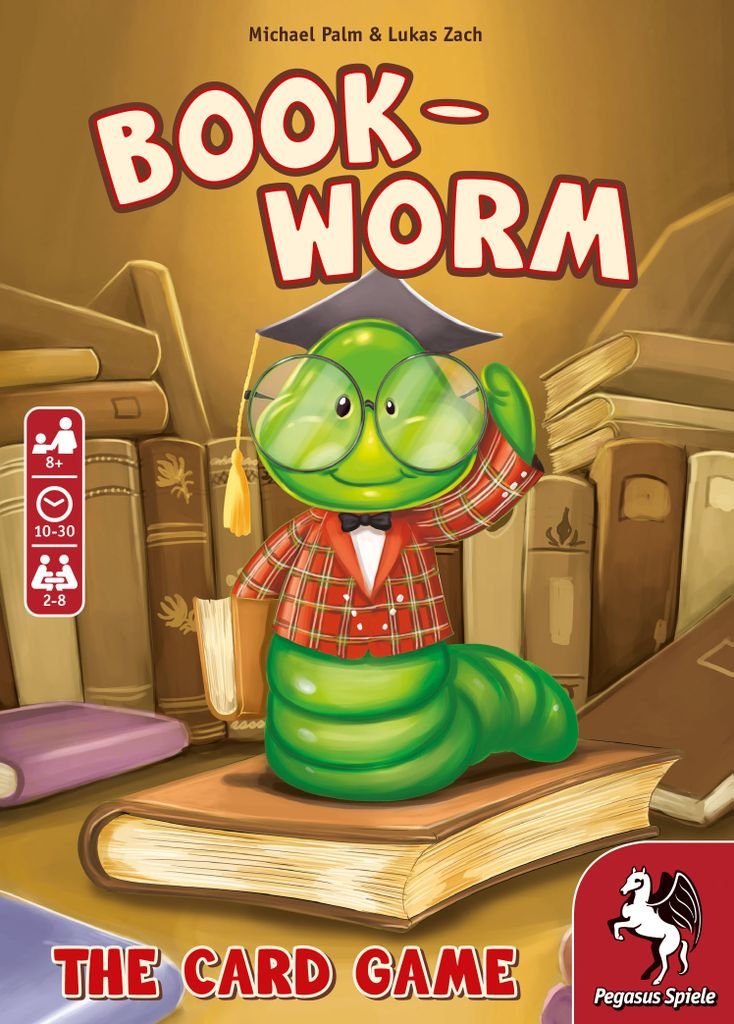 In Bücherwurm, the bookworm is looking for its successor and will test all of you as likely candidates by having you go through a plethora of different categories. In each category, you must find fitting words so that you can match a letter card in your hand. Whoever can get rid of all their letter cards first wins the game and the worthy title of successor!

Bookworm: The Card Game increases the challenge of the original Bücherwurm game because now speed is of the essence, challenging you not only to think along certain lines, but to think quickly. The game includes more categories to provide more variety of play, and it includes a number of play variants. 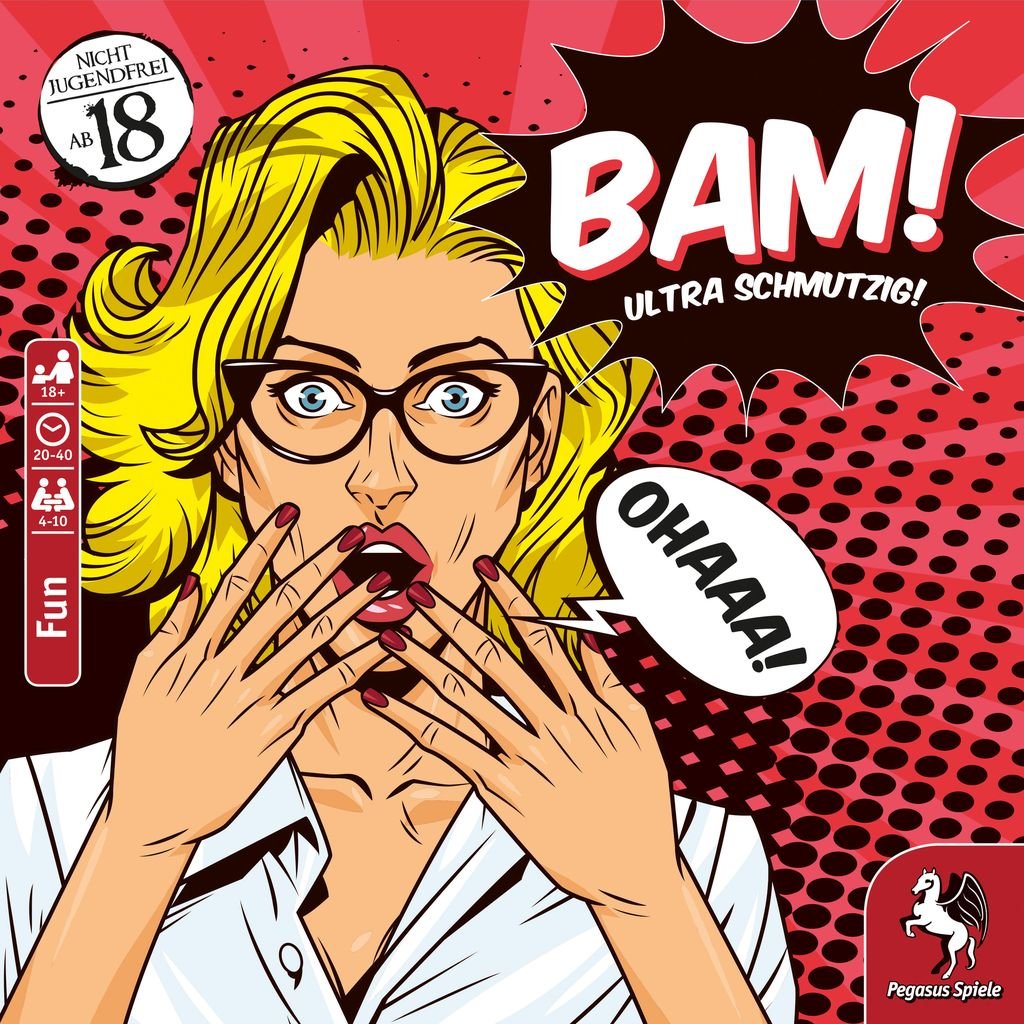