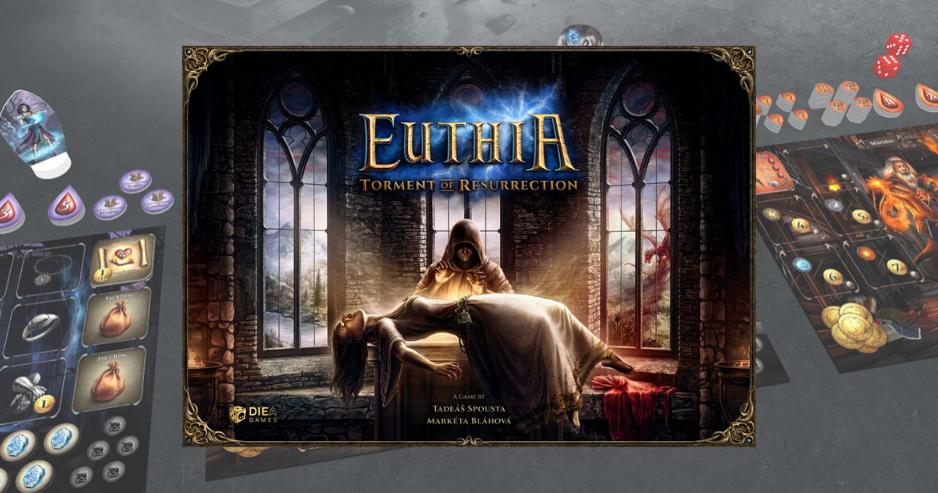 A board game inspired by classic RPG video games. You can play Euthia in Solo mode or with up to 3 friends and compete against each other.

You will face the threat of three mighty dragons born from the darkness of magic Faer. Deal with the monsters and dangerous creatures spreading through the whole land. Search for legendary artifacts. Experience the nature’s raw elemental powers influencing your steps. Struggle to fulfill quests to help people of Euthia.

But on your side, there is plenty of strategic options. Wide range of armor, weapons, spells, and jewelry filled with magic. Open playstyle for every hero. Branching chain of skills – for example playing as the warrior Dral you can be a master in various weapons, furious fighter, prospector, traveler or a little bit from all of them.

Euthia: Torment of Resurrection is a competitive strategic board game where you take the role of one of five heroes. Your hero wanders through the open-world of fantasy landscape represented by the modular tile-based map. On every turn, players use action tokens which can be spent either for respective action or movement. Actions are combat, trade, and mining.

For every game, you will choose one of three scenarios representing attempts to kill or repel one of the mighty dragons. Success in this quest provides the hero with a reputation which is also true for most of the actions the player will do throughout the game. The hero with the highest reputation in Euthia at the end of the game is the winner.

Euthia: Torment of Resurrection launches on Kickstarter TODAY, but why not try it for yourself now on Tabletopia?