Announcing The Flow of History 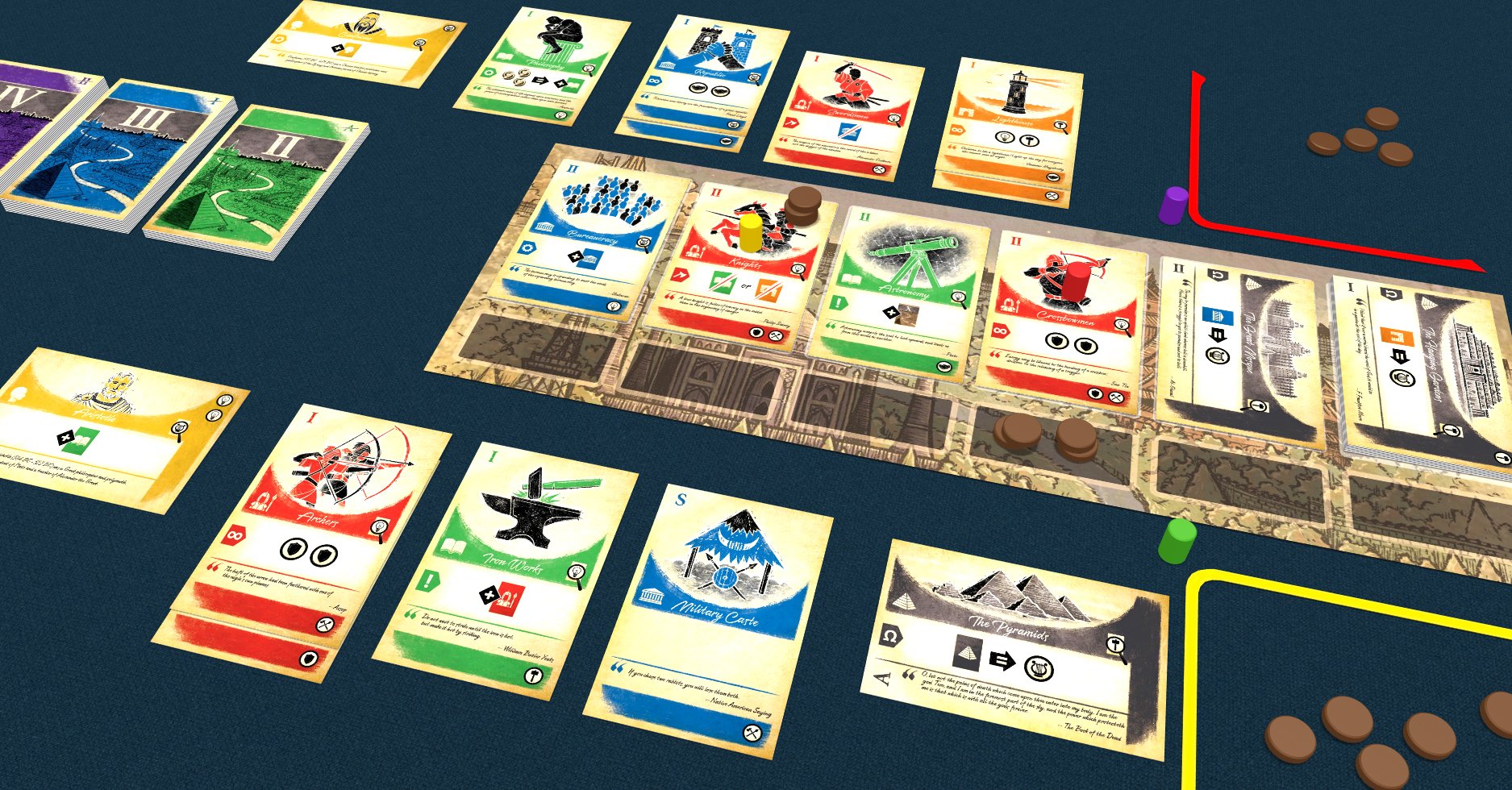 Your goal is simple. Create a civilization rich with culture able to stand the test of time. To succeed, you will need to not only focus your energy on your own civilization, but those of your rivals as well. With a shared pool of resources to fight over, and a unique bidding mechanic that will have you guessing at your opponents intentions, Moaideas Game Design brings a tactically minded medium weight game for 2-5 civilizations will keep you on your toes from start to finish.

You start with a civilization that has an initial focus, such as Military or Trade. While many games reward a strong strategy from the start with a hyperfocus on your end goal, The Flow of Time instead rewards quick thinking and the ability to adapt to changing circumstances on the fly. You might start the game as a bloodthirsty clan, only to inevitably become a peaceful trade empire by the end.

A central tableau stores cards across the ages for players to bid on to improve their civilization or potentially lay waste to others. Players have five actions on their turn, which minimizes analysis paralysis for those groups that have players like that. You can activate cards you’ve previously purchased, harvest resources to let you pay for cards, or use the final three actions to interact with the cards available on the tableau, purchasing or investing in them to improve your civilization.

Designer Jesse Li (Guns & Steel, Ponzi Scheme) has created a game that combines many of the familiar elements of other civilization builders (7 Wonders, Through the Ages, Tapestry) and brought his own spin to it. It has clear, concise rules which are easy to teach people new to the genre, and lacks complex interactions that muddy down other civilization builders and prevent them from being as accessible.

That doesn’t mean The Flow of History is without its tricks. It brings a fresh, unique take to bidding mechanics by allowing you to invest in cards on the table, only to purchase them in a later round. This signals your intention to buy a card, but opens it up for players to snipe it from you. Having a card sniped from you gets you has you getting your investment back, as well as half the resource tokens from the supply... allowing crafty players to potentially bluff their way into resources if they can guess their opponents moves, force a player to overspend resources, or deny a player a crucial card.

The Flow of History offers both players seasoned to the Civilization Builder genre, and those new to it a game of interesting, thought provoking possibilities. Clocking in at less than 90 minutes for a full 5 players, it doesn’t overstay its welcome. Those that like their games with a nice amount of player interaction will find themselves right at home here in a game that is quick to teach, but hard to master.