Can you be Top Dog? 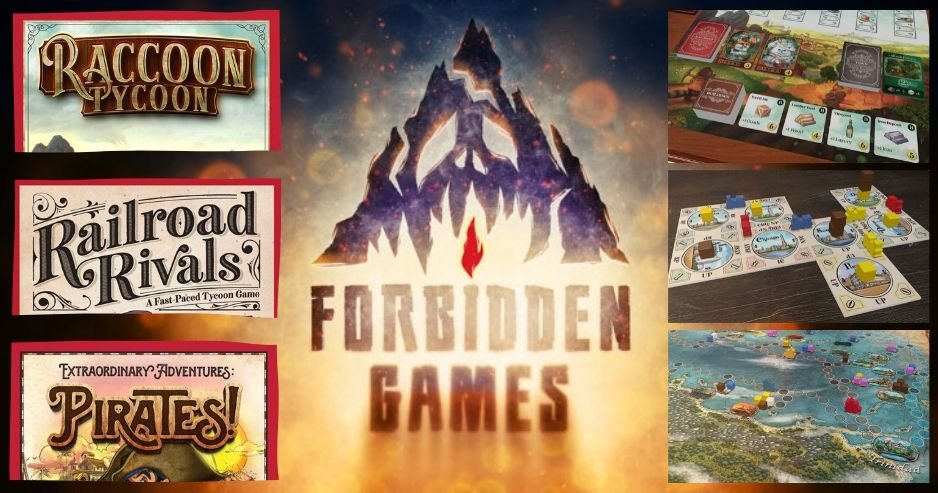 Forbidden Games brings Raccoon Tycoon a super fast, adorably themed goods production and commodity speculation game for 2-5 players. Produce commodities, sell them for a profit, and use those funds to fight tooth, claw, and paw for victory.

Each turn you will have to choose from 5 actions in the quest for victory points: Will you play a card to gain commodities but increase the cost of goods you might not have? Use commodities to sell for money or help build a town? Purchase a building for upgrades or take a risk in opening up the bidding for a railroad?

Price and Production cards are dual purpose, providing you with commodities to sell, but also raising the price of other commodities in turn. This creates an interesting tension on when best to play them. They also provide a measure of guidance over what actions you may want to take, and what buildings you might wish to acquire.

Railroads have a set collection mechanic (Jaipur, 7 Wonders), gaining you more victory points at the end based on how many of the same type you have. However they also provide bonus points when coupled with towns, so keeping a ratio here can be important. A nice touch is that if you start an auction on your turn but fail to win it, your action isn’t wasted and you can go again.

Glenn Drover (Railways of Nippon, Empires: Age of Discovery) has created a game which oozes charm from every pore. While traditionally games about commodity speculation are dry, barren affairs, the addition of well dressed foxes and pickaxe wielding dogs provides enough levity to allow players who would normally be turned off by such games to give them a try.

Being restricted to just 5 actions on a turn makes for quick decision making, and keeps the game moving along at a solid pace. It also becomes easy to teach both young and old alike. The Price and Production cards add a nice element of forward planning mixed with risk and reward, and a lost auction never feels like a bad result due to your ability to continue your turn.

Raccoon Tycoon is ultimately a well considered design that plays fast and hard, with a veneer of theme for additional accessibility. Can you muster up enough skill and fortitude to win? After all, it’s a dog eat dog world out there, and only one of you can reach the top.

In addition, Forbidden Games have made 2 other games from their catalogue available on Tabletopia; Extraordinary Adventures: Pirates! & Railroad Rivals!

Extraordinary Adventures: Pirates! see you become a pirate captain sailing three ships throug hthe Caribbean in search of rich merchants to plunder and friendly ports in which to trade your booty for riches. Manipulate each ship "track" to gain benefits and be the first to have one of your ships reach the Spanish Treasure Galleon at the end. Build your deck by recruiting crewmen along your adventure, and score points from treasure you collected - the winner will be crowned the Pirate King!

Railroad Rivals is a bidding, drafting, and tile placement game that sees you connecting to cities across the United States all while building your stock portfolio. Use your connected railroads to make deliveries that drive up the price of your stocks. At the end of the game, the player who has run the most profitable railroad while also owning the most valuable stocks becomes the greatest of all of the railroad rivals!