Dispatch your strongest gladiators and most ferocious beasts to earn crowd favor in Gorus Maximus, an upcoming trick-taking game of gladiatorial combat. 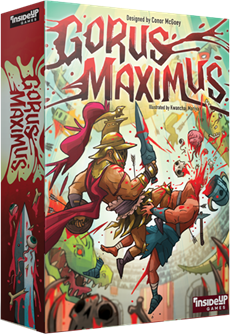 Gorus Maximus can be played "player vs. player" or in teams. Players are dealt a hand of ten gladiator cards and must contribute one gladiator to each bout (trick). There is a preferred school (trump suit) and the strongest gladiator from this school wins the bout. If no preferred gladiator entered the fight, then the strongest initiating gladiator (suit called for) wins. Players must follow the initiating school if possible, or they may "challenge" by matching the strength of the last gladiator played, immediately changing the preferred school to that of their gladiator! Players compete to collect gladiators with positive crowd favour and avoid those with negative favour. The player with the highest favour at the end of the round earns 1 crowd support. The first player to earn 3 crowd support has won the support of the masses and earns the title: Champion of Gorus Maximus!

First physical release of the game is already funded on Kickstarter, so don't miss it out!