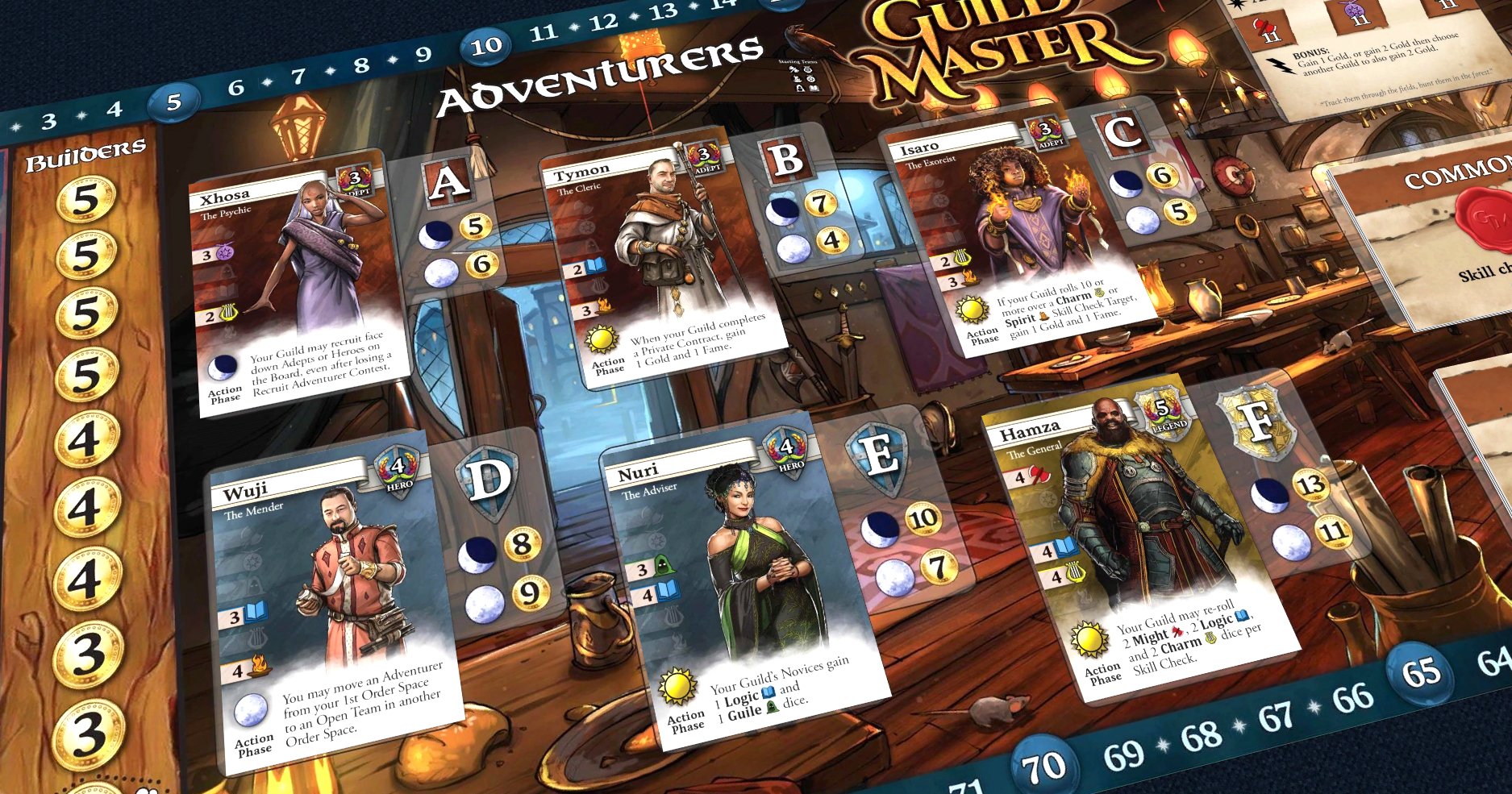 Have you ever wanted to manage a fantasy guild of adventurers starting from fledgling adepts up through heroes and legends? With Guild Master from Good Games Publishing, now you can. Playing up to 4 over the span of 1-2 hours players will try to become the most renowned guild in the land.

Guild Master has a unique mixture of mechanics up its sleeve. At first glance the gameplay loop might seem simple: order your adventurers to go out and attempt contracts to gain coin or fame, recruit adventurers to do more complex contracts, or hire builders to upgrade your guild… but designer Chris Antony has made each of those choices carry weight, meaning, and tension.

Adventurers have things they’re good at, and combining those skills is a core part of the game. These will get you a larger chance at winning skill checks, giving a dice per skill point in order to beat static numbers, or rival guilds. They also have abilities that can only be activated in certain rounds of the game.

Giving your adventurers tasks is done in secret simultaneously by all players, programming out what you hope to achieve for the round, and combining skills of adventurers to help (Robo Rally, Root). Once revealed however, you may find that an order you programmed was too late and a rival guild got there first, or possibly worse, you are both attempting to do the same thing, and are contesting.

Contesting guilds behave differently depending on the action they’re contesting, with some actions simply requiring the adventurers to use their skills to beat the contest, or have the player have offered an adventurer more than another guild. But in the case of contracts, you’ll be negotiating with other guilds openly, discussing what facets of the contract you’d like to split, and then finally secretly revealing if you intend to cooperate, or conflict further.

Normally, negotiation in games becomes a centrepiece (Twilight Imperium, Rising Sun, Cosmic Encounter), but with Guild Master, there is tension to every action so that it becomes a seamless part of the game instead. Some games also restrict you in what you can negotiate on, but here even flat out bribing is encouraged.

There is a lot of depth, nuance and tension in Guild Master, with each action you can take being crafted to be as interesting as possible. With so many branching paths to victory, this is a game that will keep you wanting to play again for different outcomes. Do you have what it takes to make the most famous guild in the land? Or will your accomplishments lie unremembered through the sands of time.

Tabletopia Tip: Some games have zones where only you can see what is in them. Where you give out orders in Guild Master is one such place.