a few words about our philosophy 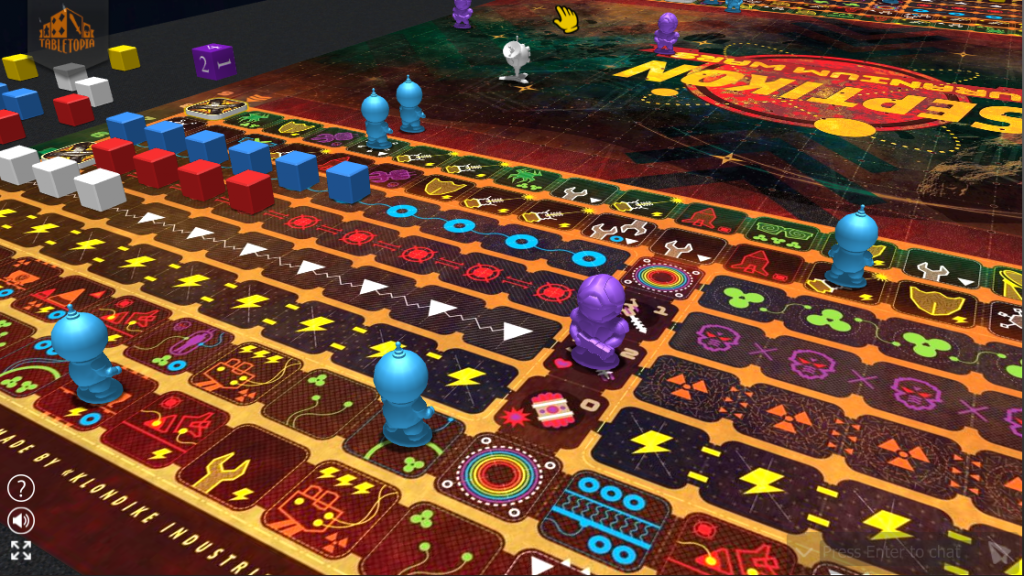 Hey everyone! This is our second blog entry, and today we will talk more about how Tabletopia works and what the reasoning is behind its functionality.

We all know how board games work. Even those who never played a single time in their lives would understand it on an intuitive level. Setting up a game table, rolling dice, playing a card, moving a game piece. It’s also quite easy to grasp general concepts like game set up and turn order. The game board is usually in the center and players sit around it so everyone sees it clearly and has it at arm’s length at the same time. And the turns are usually passed clockwise. Those are basic ergonomics rules.

That said, we tried to recreate that look and feel while designing Tabletopia’s user interface. And we think we did quite a good job with the exception that you use a mouse cursor (or your finger on mobile devices) instead of your hand. Everything else works as you’d expect and are used to in real life. For instance, you could draw a card, take it into your hand and move it, or turn it over, or put it onto the table, or shuffle it back into the deck. Thanks to that it will be easy to play every game on Tabletopia: The UI is always consistent! Moreover, in time you will learn some hotkeys to do each action even more quickly.

That is not the only advantage you’d have because of playing in a digital form. You could deal cards or shuffle a deck in just a few seconds. Or set up a game anew in a moment by pressing one button. And, of course, you’d never have to put everything back into the box after a game is over! Naturally, we will have all that on Tabletopia, but there’s even more. Having a lot of different camera positions (you can set them up and then switch between them in just one click) allows to easily get any information you need or concentrate your attention on some particular game zone. In addition should you be confused with the rules of the game, there’s also contextual help making all of your turns easier.

We are paying a lot of attention not only to the user interface, but to the aesthetics as well. You can customize a game table, environment, sounds and background music. We will have a selection of different options out of the box, but players and game creators will be able to add ,for example. their own unique sounds. Wouldn’t it be nice to play a roar when you attack (put down or tap card) with a wolf? Or have your robots say “Death to all humans? You could totally do that with your own sounds.

Just think about what cool sounds you could assign to these characters!

Right from the start, Tabletopia will offer a sandbox format, which means that the players will themselves make sure they follow the rules of the game. So this is just like playing at a real table with friends, but with the digital lifehacks mentioned above. However, we will help you to keep track of different parameters of the game with intelligent counters. They can be used to gather and aggregate data like victory points, hit points (or durability), number of turns played and so on.

Set your virtual cameras as it suits you. Move between them with one click. Nothing can hide from your attention

But generally you’re completely free to play as you please. Why do we think that is good? Most importantly, the experience is as close as possible to that of a real life gaming session. You could also change game rules or adapt your own ones (house rules), rethink or even redo your turns, ban the use of items you think are too powerful. So we are speaking about freedom here!

Moreover, this sandbox approach also allows create game from standard print-version graphics in a couple of hours and make changes on the fly in mere minutes!

Sure, full game automatisation and AI can be helpful to players new to board games, but at the start we will be targeting more experienced board game lovers. That doesn’t mean we will cater only to them. Soon after the initial Tabletopia launch we will expand the system, adding more functionality. First of all, we will allow to automatize the game. The system will be set by the game’s creator and check if the players follow the rules. Secondly, we will implement API for artificial intelligence. Naturally, the game creator will also be able to set how the AI works.

Counters – new option how to keep track of victory points

And at the end our platform will allow publishers and game authors to choose themselves how much time and effort they are ready to invest in an adaptation of their games into a digital format. We will like to talk about it in more detail in our next post. Stay tuned!