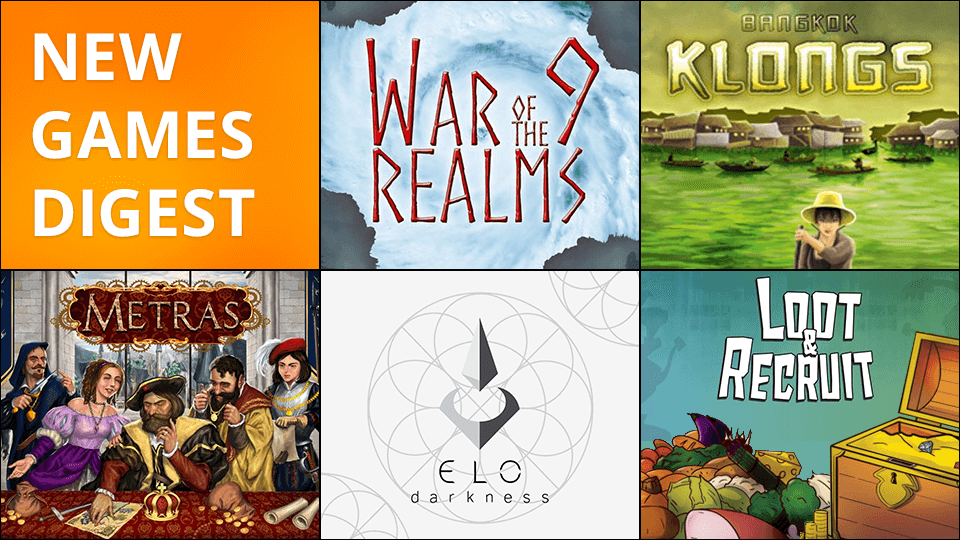 So many new games appear on the platform these days that we decided to introduce a new "column" where we will tell you about our newest releases in a nutshell. Today please welcome Loot & Recruit, ELO Darkness, Metras, Bangkok Klongs, and War of the 9 Realms.

In Bangkok Klongs players place boats on the Klongs (canals) of Bangkok, trying to take the best places. When a scoring round occurs filled up squares can be scored. After scoring players have to remove a boat which they can take in stock. The stock will be scored at the end of the game.

In Loot & Recruit you become a contestant in a crazy Goblin festival as you compete for the title of Goblin King.

During the festival, you will add new cards to your deck, recruit Goblins for victory points, attack other players, and hire minions to perform special actions.

ELO Darkness is a MOBA-inspired boardgame, based on card-driven mechanics, in which 2 players fight against each other in an epic 3-Lane arena.

Players each have a deck of 40 cards representing a team of five Heroes, each one of these with a specific role on the battle front.

War of the 9 Realms

War of the 9 Realms is a tile based tactical skirmish game based on the Realms of Norse Mythology. Each realm is comprised of unique Norse characters and their wondrous abilities.

The game allows you to pit these against each other in a bid to claim total victory. The victors will reshape the World in their own form.

In Metras you are the head of a Noble Family of the Empire of Metras seeking the favor of Emperor. You will hold lavish parties, resort to intrigue and corruption, or face epic missions on behalf of the Emperor.