30 minutes of desperation and madness! 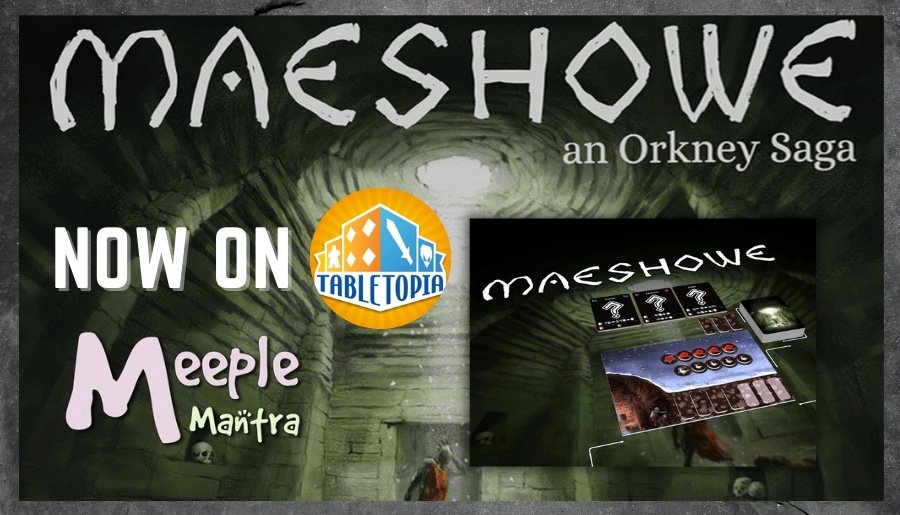 According to the Orkneyinga Saga, Earl Rognvald Kali Kolsson broke into the chambered tomb of Maeshowe, on Orkney, in AD1150. In AD1153, Earl Harald Maddadson and a group of his men sheltered there during a snowstorm. The sagas tell us that Rognvald found treasure there and that two of Harald’s men went mad.

Alone or with a friend, players will on their turn need to play one card to the row and discard one. Managing their hand of five cards players need to make tough calls on what to play while carefully managing their resources of health, food and cards left in their draw deck.

The players will free themselves from the Tomb of Maeshowe once they've removed enough rubble blocking their escape. By playing a set of four "Excavation" cards to the row, the players are able to remove rubble. The timing of when to start a set of "Excavation" cards will be critical since a row of less than four will result in those cards being lost decreasing player chance for survival.

If the player ever finds themselves having 0 health or run out of cards in their draw deck, they have lost and their dead bodies will be found in the Tomb of Maeshowe by Archeologists hundreds of years later.

Other threats presented by their draw deck includes such things as the passage collapsing and running out of food while some well-needed sleep or Odin himself sending a Raven to watch over you can provide you with some much-needed relief.

This updated version of Lee Broderick's Print and Play game Maeshowe offers a streamlined version of the core gameplay while adding a series of mini-expansions and alternate set-ups for more variety, challenge and replayability.