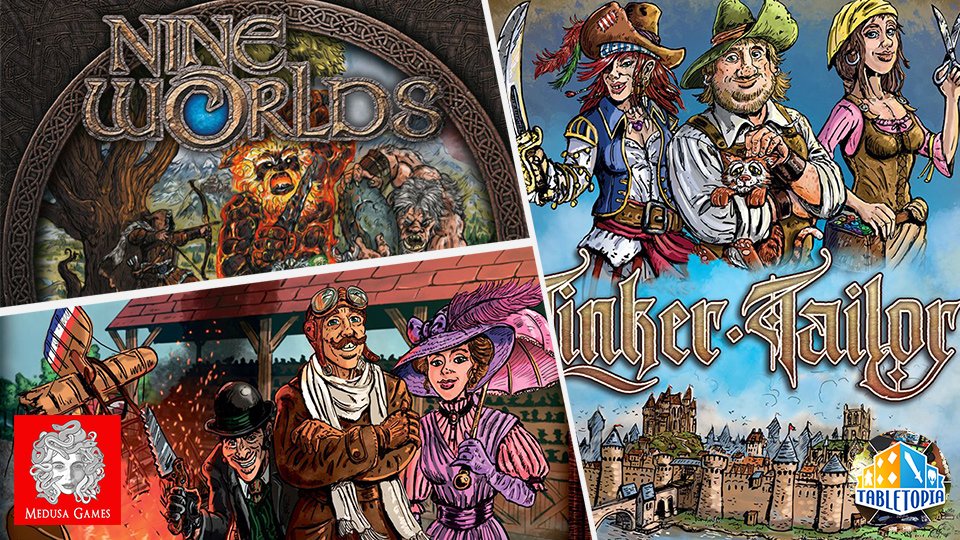 Three new games from Richard Denning's Medusa Games have now landed on Tabletopia! No need to freeze in place, you can play them right now!

The nine worlds of Norse and Anglo-Germanic myth comprise the battleground for this area control game.

In the game Nine Worlds, players struggle to take control of these worlds, spending action points to add or remove armies, move them between the worlds, or banish them to Helheim. Control of a world gives access to world powers that players can use to win the game. Victory relates to the numbers of armies that players have in the Nine Worlds along with controlling or disputing control of as many worlds as possible.

Tinker Tailor is a role-picking and set-gathering card game for 2 to 6 players suitable either as a general family game or as a light 'filler' game. The aim of the game is to get the most points.

Points are collected in the form of money cards or goods cards, and the more goods cards a player owns (up to a maximum of eight) of a given type, the greater the value of the cards. Players also get a bonus for collecting all five goods: Bread, Fish, Cloth, Wine and Gems.

Each turn, each player selects one role that defines the action they can take. The players who make the best choices and uses their actions to the greatest advantage will win the game.

This game takes inspiration from the great air races of circa 1908 to 1913 which took place in the pioneering era of air travel. These air races galvanized interest across the world and encouraged by generous prizes by newspapers and other sponsors attracted international entries. Air travel was risky and most unreliable. Often only a small number of the entrants would make it to the finish line. Will one of your pilots manage to face up to the challenge? But watch out: In this era of gentlemanly behavior and stiff upper lips, there are a few cads and bounders who will cheat to win.

In Magnificent Flying Machines, the player who ends the game with the most victory points wins. These can be earned in various ways including being the first to land successfully on a certain terrain tile, landing on the middle airfield, transporting cargo or passengers, or performing trick maneuvers. Simply being the first to cross the finishing line is unlikely to be enough on its own to secure a victory. The winner will be the player who picks a strategy that best matches the abilities of the pilot and features of the flying machine they are using.