Complete contracts to power the country with renewable energy. 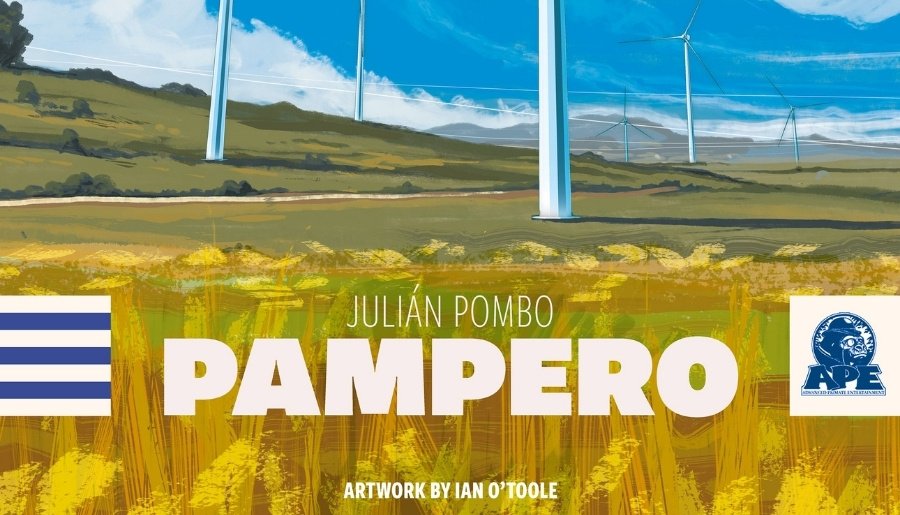 With no natural resources, the Government of Uruguay is concerned about the country’s dependence on imported fossil fuels. As a consequence, it is seeking to increase the share of domestic resources, of which the most feasible are biomass and wind energy, as well as employing end-use energy efficiency measures to increase its energy security. In addition, the government aims to use the intended growth of the domestic energy sector to foster its other objectives of increasing economic growth and creating employment. (Extract from World Bank Documents, CASE STUDY 11: URUGUAY – WIND ENERGY PROGRAMME)

Pampero is a hand-management, card-driven action-selection game. Every player has a starting set of eight cards to be played on their own tableau, which contains two rows of spaces to activate actions on the different sectors of the board. Each turn, you have the option to play a card to the leftmost empty space of either row or to retrieve all cards from your tableau. After three actions, a special phase takes place — consolidation, during which you retrieve the rightmost card from any row, generate batteries from stored energy, collect income, and advance the game timer. The player with the most money at the end of the game wins.