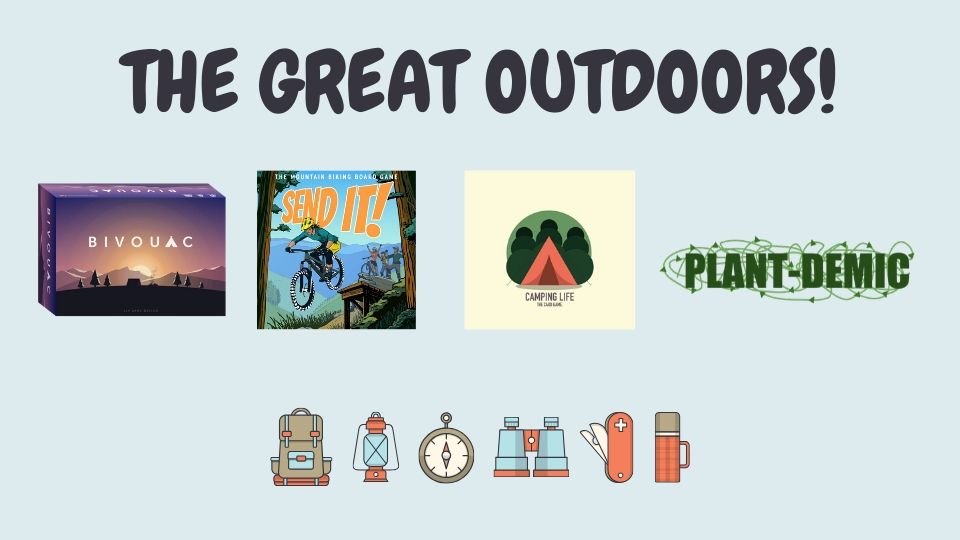 Time to hit the great outdoors! Check out these brand new games that will get your heart pumping as you breathe in that sweet, fresh (digital) air. It's not like you were leaving the house anytime soon, right? 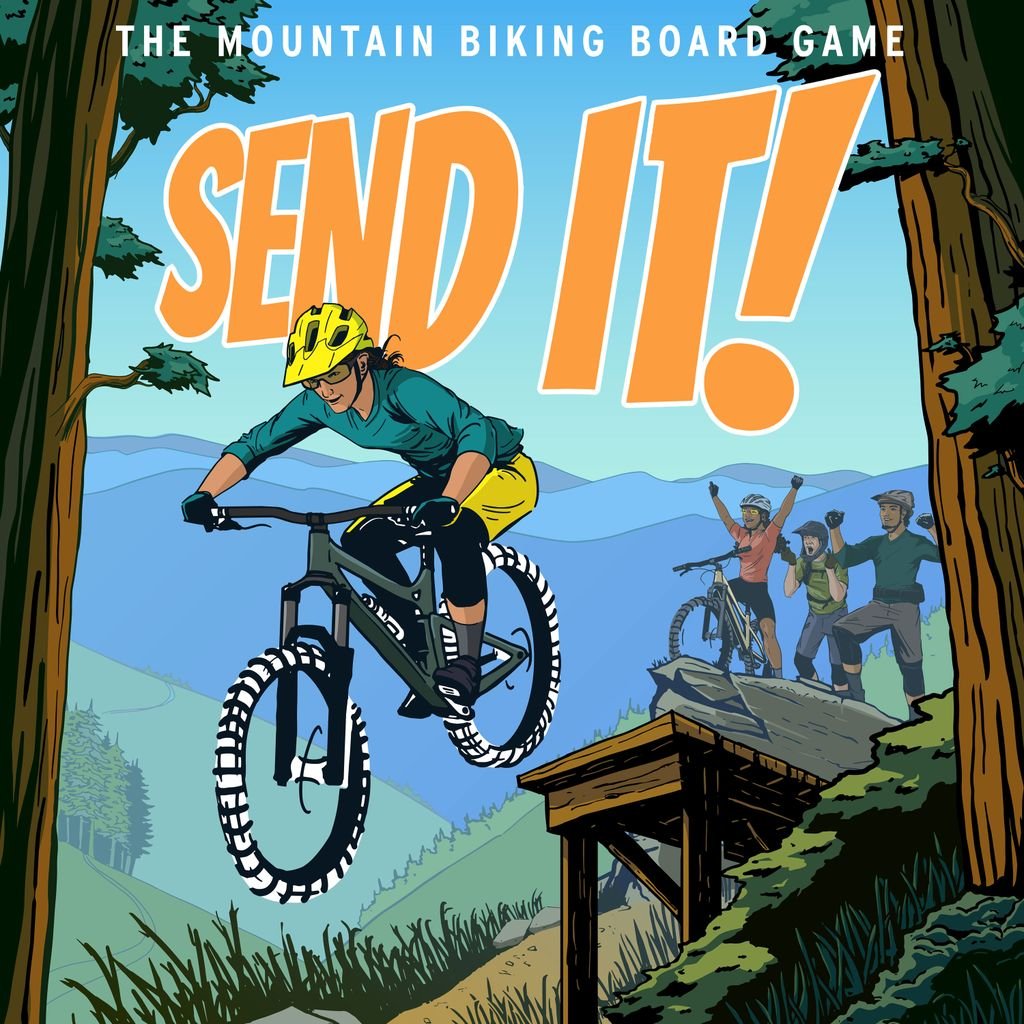 SEND IT! is for those times when you want to ride, but can't — maybe you're injured, maybe it's too muddy or maybe you're just tired from your latest adventure — because no matter what, even when you can't ride, you should be able to SEND IT!

SEND IT! is a fast-paced mountain bike game where you ride, train, prepare and "send" progressively harder features as you race from the trail head to be the first to send the final feature and reach the Golden Burrito.

Riders roll to train and move while drawing prepare cards to improve their chances of successfully sending the next feature, all while trying not to crash. Should you play it safe or just "SEND IT!"? 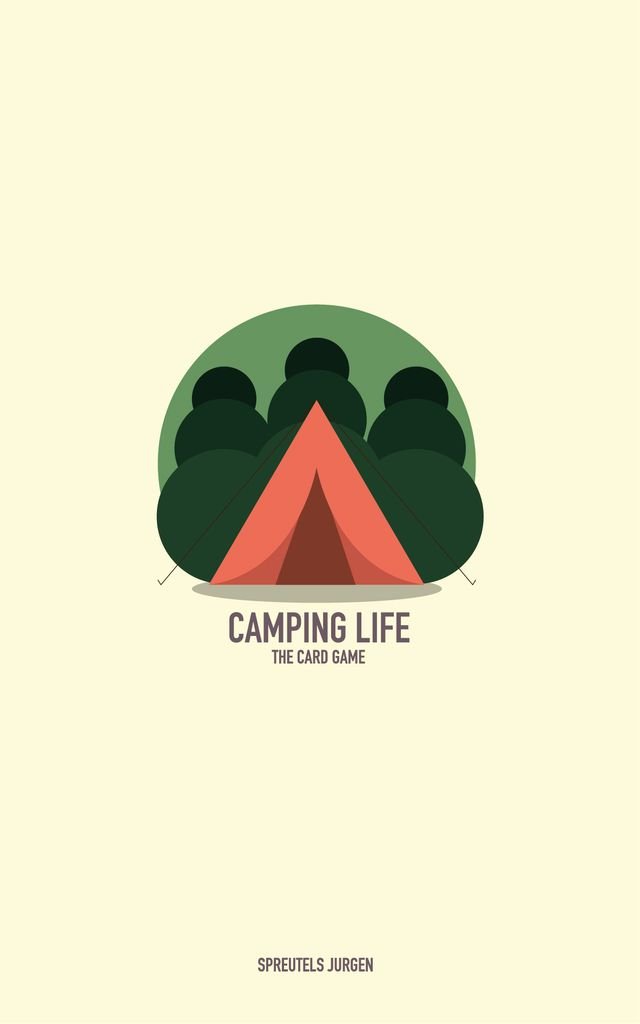 In Camping Life you are building a Camping spot for everyone to enjoy.

This auction game is different from others, each round you are trying to get the best cards to make the most beautiful camping. But be careful, not every card is a gift, try to score extra points with different missions in each game.

You start with 6 bidding coins every round, but you can only use 3 of them, the 3 other coins will be set aside to win extra cards.

The player with the highest score at the end of the game is the winner!

You and your team are the last defense standing in the way of an invasive species that threatens the world! From the Arroyo Earth Team, Plant-Demic is a cooperative game of teamwork and strategy. Up to four players will play as the invasive removal team (humans) and will be pitted against one player playing as the invasive species (2-5 players total).

Who are we? We are the Arroyo Earth Team, a group of interns for the Earth Team organization, dedicated to cleaning up the Earth and restoring its natural beauty. We created this game in order to raise awareness about invasive species, which can be very harmful to not only the environment, but the human economy and even human health.

Love ourselves. Love the world.
#ImRootingForTheEarth

This game was created by high school students! Play it now on Tabletopia! 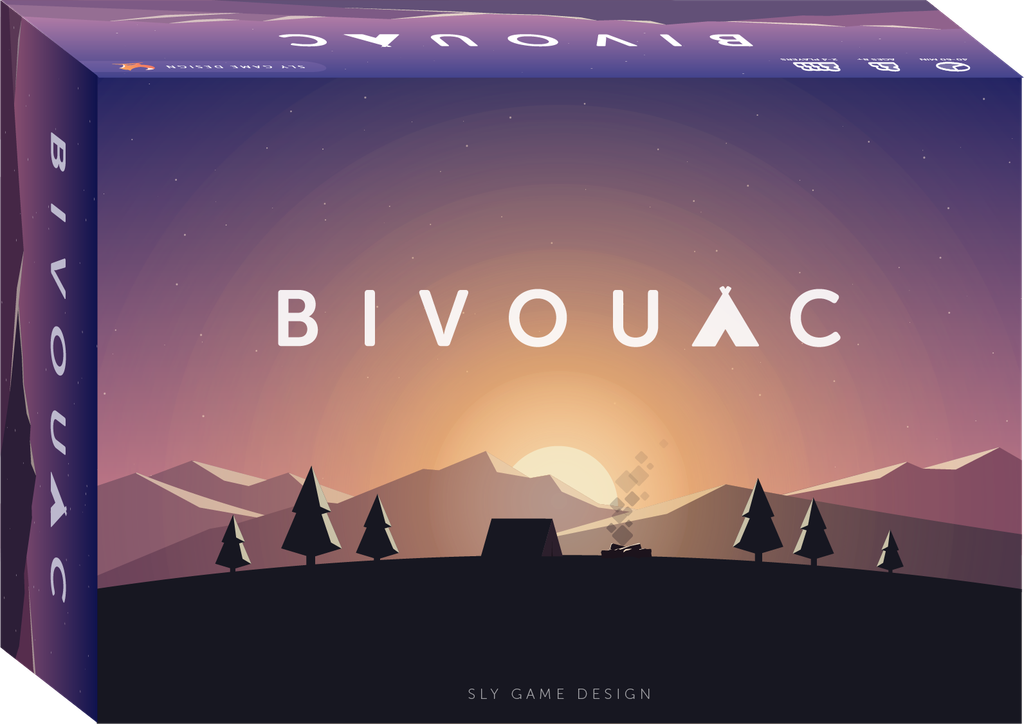 Bivouac is a camp-themed board game that tasks players with creating their own Camp/Retreat Center. The game is played over 13 rounds represented by the months of the year. Players utilize workers to gather resources, build amenities, add activities, recruit donors, obtain donor gifts, hire more workers, staff usable cards, and earn money/victory points.

Usable amenities and activities are the driving forces for generating money and victory points. Some, however, are not usable every month of the year. Players must create a strategy for sustainable growth over the course of the entire year. Workers must be paid for their efforts each month. Additionally, negative cards, called Misfortunes, must be drawn as your camp grows which may affect your plan for the next round.

End game bonuses provide additional victory points based on what you have accumulated throughout the game. Bivouac also comes with an expansion that includes activity upgrades and staff member cards that assist in a player's quest to become the best. The player with the most victory points at the end of 13 rounds is the winner.

This game will be returning to Kickstarter later this year - play it now on Tabletopia!