Woe to the Vanquished

Challenge yourself as Roman patrician trying solve problems with barbarians, workers, mercenaries and senators in semi-competitive game of decline and treachery Vae Victis! 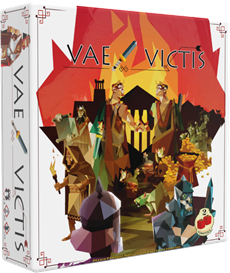 Rome is going to hell. Redneck barbarians are raiding the borders, the economy is in freefall, and the sewer workers are on strike...again. To top it all, mercenaries and slaves have delusions of grandeur (they want to be paid, for Jupiter's sake!), while those petty pencil pushers at the Senate indulge in never-ending rhetoric displays. As a wealthy patrician, you're pretty sure it is expected that you lend your help to Rome in this dire time of need, but then again will your "friends" do the same? The Ides of March are around the corner...

Game is already funded on Kickstarter!