Games for this weekend №6 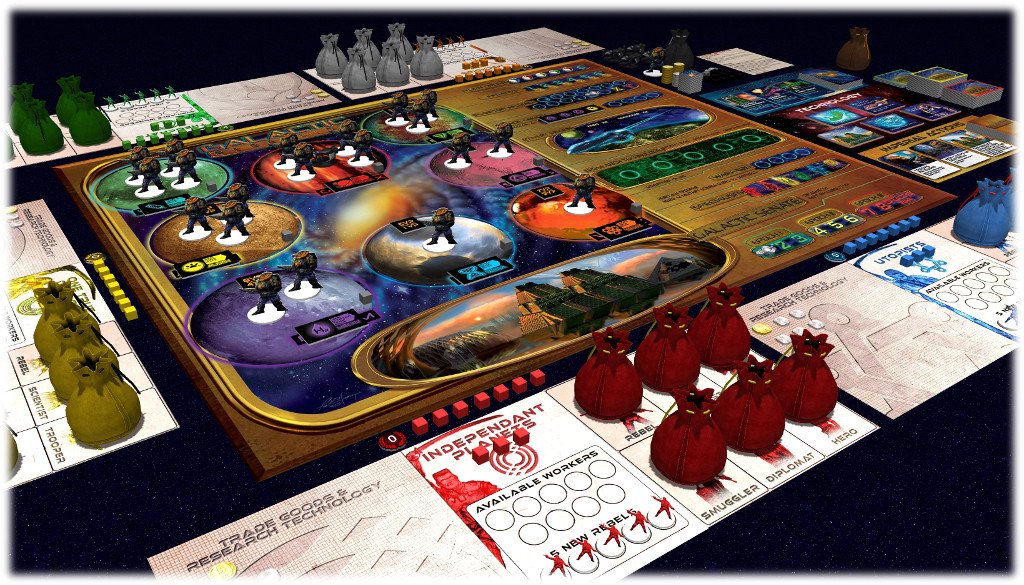 Just as in its predecessor, players of VivaJava Dice take on the roles of employees at the VivaJava CoffeeCo., scouring the globe for the best beans to keep the company on top while keeping themselves one step ahead of the rest of the executives. You're now part of the School of High Alchemy, but you still have a long path ahead of you, a path that can lead to wisdom, yet a path which is laden with pitfalls and threats that will test you in ways that you can't even imagine. Work hard. Learn to control the elements. Study each recipe and combination, no matter how impossible they may seem. Face your worst fears. And trust fortune as well because it's wise to admit that not everything is in your hands. That's the only true way to become an alchemist.

The game is all about gaining resources, using the abilities to transform them into other resources (or multiply them), and rising in the different boards to gain as much knowledge as possible. Discontent festers at the fringes of the Galactic Empire. Seditious whispers across light years of empty space have grown to a chorus of audacity, forcing the Senate to acknowledge open rebellion as a real possibility. Unrest organizes in the shadows of sovereign space as the Senate remains divided on to how meet and suppress the growing threat.

The rebellious for their part lack focus; their discord matched only by their hatred of the Galactic Empire. Competing visions of what life after the Empire should look like prevent cooperation between the rebellious factions. Leaders arise out of the squabble to gather about them the forces to achieve their righteous views of the future.

You are one of these leaders and it is up to you to organize your faction, to mobilize a rebellion, and to defeat the Galactic Empire.

You might be also interested to check the Kickstarter campaign running at the moment by Gryphon and Eagle Games. Chaos Ninjas is a light card game created by Shane Gelven. This game combines both strategy and take-that elements.

In Chaos Ninjas you play the role of a Warlord who is hiring Ninjas.

You are trying to be the first player to have six unique Defender Ninjas in front of your play area. On your turn you only perform one action, either take a card or play a card.

Very easy to learn and easy to play.