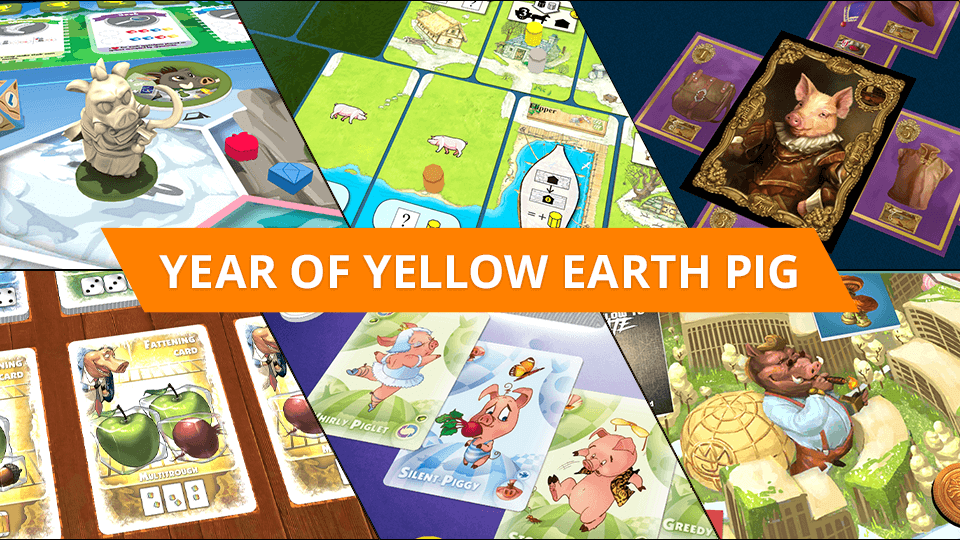 Dear Tabletopians, Lunar New Year under the sign of Yellow Earth Pig had come, so we've decided to gather all animal talismans from Tabletopia to bring much luck and interesting game experience. May the force of pigs be with you!

This is a competitive, family-friendly game about adventures in the Kingdom of Pomme. It’s mechanisms are inspired by the bestselling game, Scythe. The Kingdom of Pomme is the crown jewel of the seven animal kingdoms and coveted as the source of crispy red apples and magic gems. Each year kingdoms send two of their most promising young Seeker siblings to participate in the Harvest Tournament. Two of them are boars, armed and dangerous!

The object of the game is incredibly simple — you must get rid of your cards before your opponents do. You will be helped by a team of Superpigs. Meet our heroes: the super-fast Lightning Pork, the Greedy-Piggy, the Cunning-Piglet, the Cool-Beans Pig, the color-changing Pigameleon, the secretive Mystery-Piggy and the strict Ms. Sauerbraten.

This is a card-driven game based on many of the ideas contained in the award-winning game Keyflower. The game flows quickly over four game rounds (seasons), allowing players to develop their own unique village, with many ways to score points for their buildings, animals, keyples, resources... And pigs, of course!

Welcome to the Jungle

In this game you take on the role of a crew leader using cash and goodies to take over territories in the jungle. But you're not the only one! Everyone wants a piece of the pie and It’s all for the taking if you have the guts to grab it. Especially that stylish boar from financial district. Beware!

A genuine Swintus always thinks about food and would never give up a chance to store up some! Prove that you are the best at hoarding food. Roll the dice and use the results to obtain food cards right before opponent swines can do the same. Start chasing those calories now!

In this expansion for Keyflower players develop the agricultural side of their economy by acquiring new farm buildings, growing wheat and collecting and breeding farm animals (cows, pigs and sheep). Animals are kept in the fields created by the layout of the roads, adding a new dimension and considerations to the base game.

In today’s feverish turmoil of new currencies, corporate magnates force usually layabout hogs to work tirelessly on cryptofields, digging for different kinds of oinkoins until they are blue in their snouts. But true Swintus can overcome any hardships. All you need is simply to squander away the whole capital entrusted to you and be the first to leave on vacation. Your glorious business venture will become a legend among all lazybones of neighboring (crypto)farms.

To win the coveted Creature College Cup in this game, you must collect more victory points than your opponents. That VPs can be won by collecting creatures, completing missions, building your research lab, and smacking down your enemies! But don't forget about Kevin the Giga-Pig!!!

Boars on the Run

For the common hog, life in the rural areas is cheerless. It is always raining, and you never know when you will encounter the the butcher on the streets, or the big bad wolf in the shadowy forest. But there is hope! Four young and decisive boars finally made up their mind that they’d had enough of this piggery, and prepared to embark on a journey to a foreign land, one with warm weather and a promise of a peaceful life. Run, boars, run!

In this rummy-type card game players choose one of four fancy animal portrait boards and use the material cards to make runs in order to acquire fancy clothing items. Just look on that piggy!! Fabulous!!!