The most popular games and categories of the year 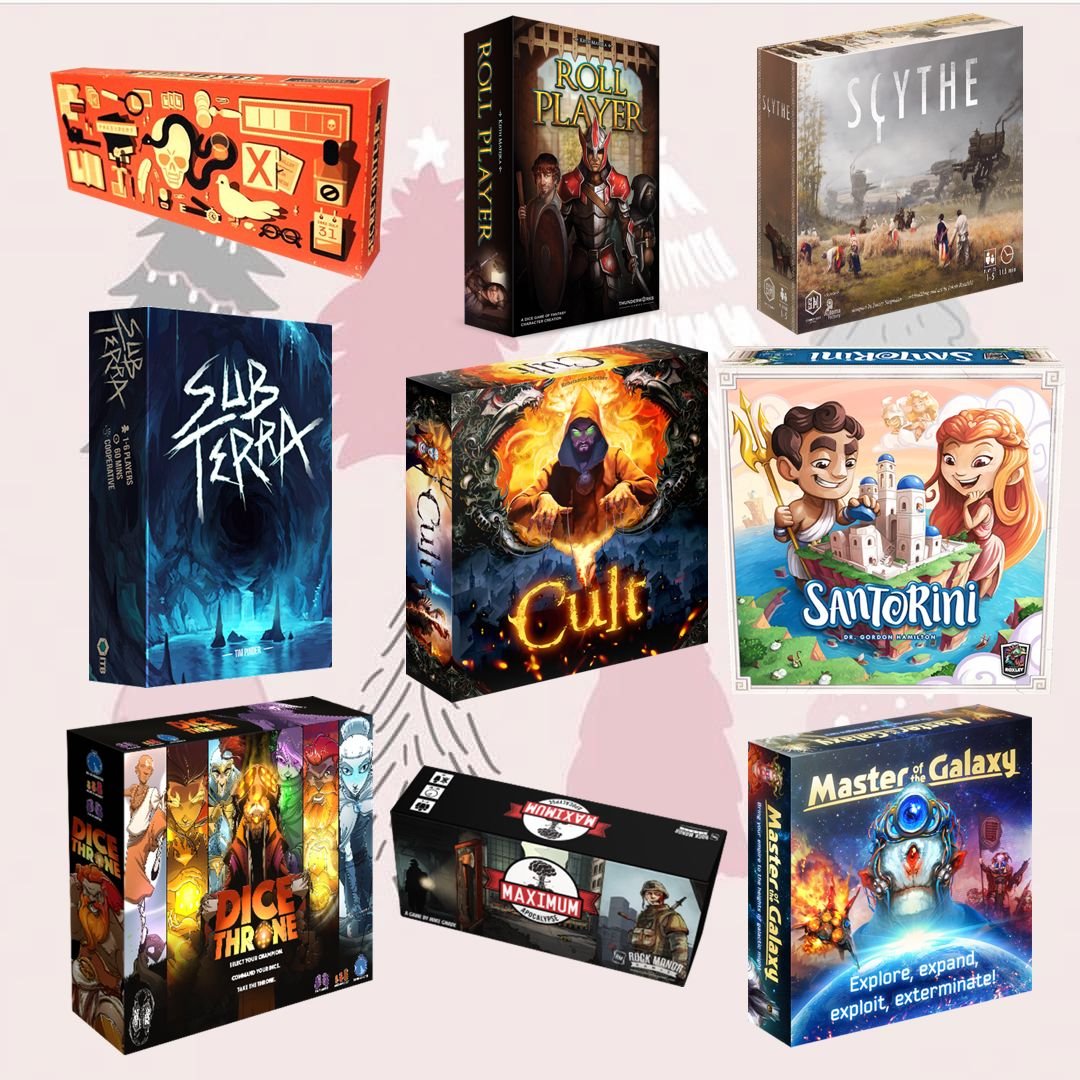 Happy New Year to all Tabletopians!

Our platform keeps growing with more games and more features. In 2018 Tabletopia became available for iOS and Android tablets, our catalog now includes more than 660 games and we’ve launched a lot of stand-alone DLCs on Steam. With Tabletopia you can play, explore and playtest games whenever you want in a format that you prefer the most. And that is only the beginning. We keep working and have some great surprises for you in 2019. But right now let’s check out what games were the most popular on Tabletopia in 2018.

The most popular board games on Tabletopia in 2018.

This year the most played game on Tabletopia was Secret Hitler with solid 7,065 hours played. Roll Player and Scythe are not far away. The last five: Santorini, Sub Terra, Cult, Maximum Apocalypse, Dice Throne and Master of the Galaxy were very close to each other.

Here you can see the distribution of time that players spent in these top 9 games. It is worth to mention that though Roll Player is on the second place it had the largest amount of gamers, who have tried this game. Well done! 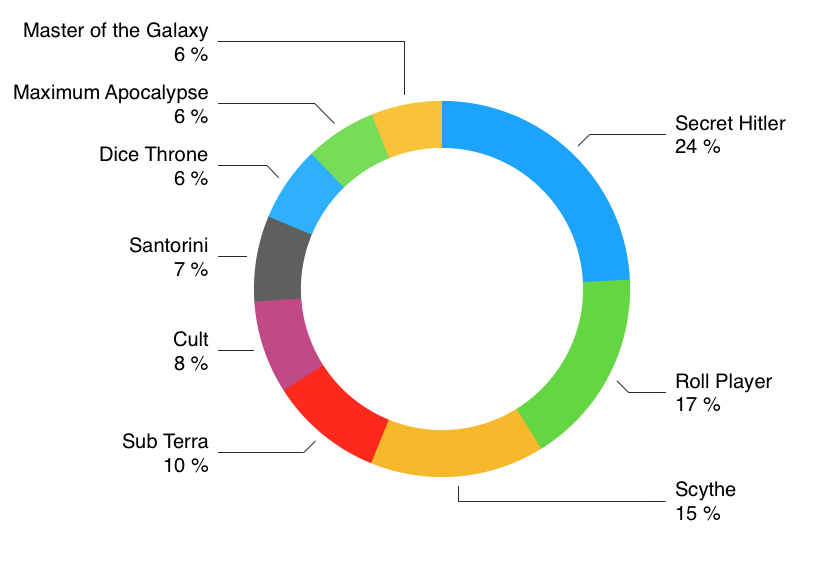 The Most Popular board games (according to google analytics)

Above we have seen what games you Tabletopians prefer to play the most. But every day lots of people come to Tabletopia from all around the web. Here are the board games that became the most popular as the first page that a gamer interacted with. That happens when a user had followed the direct link on an external website, social nets or google.

We can see, that Scythe, Secret Hitler and Santorini are still in the top. But the second place was taken by Renegade. Moreover, this list was rushed by mythical Twilight of the Gods, picturesque Tang Garden, well known Terra Mystica, fun Spyfall and minimalistic Villagers. 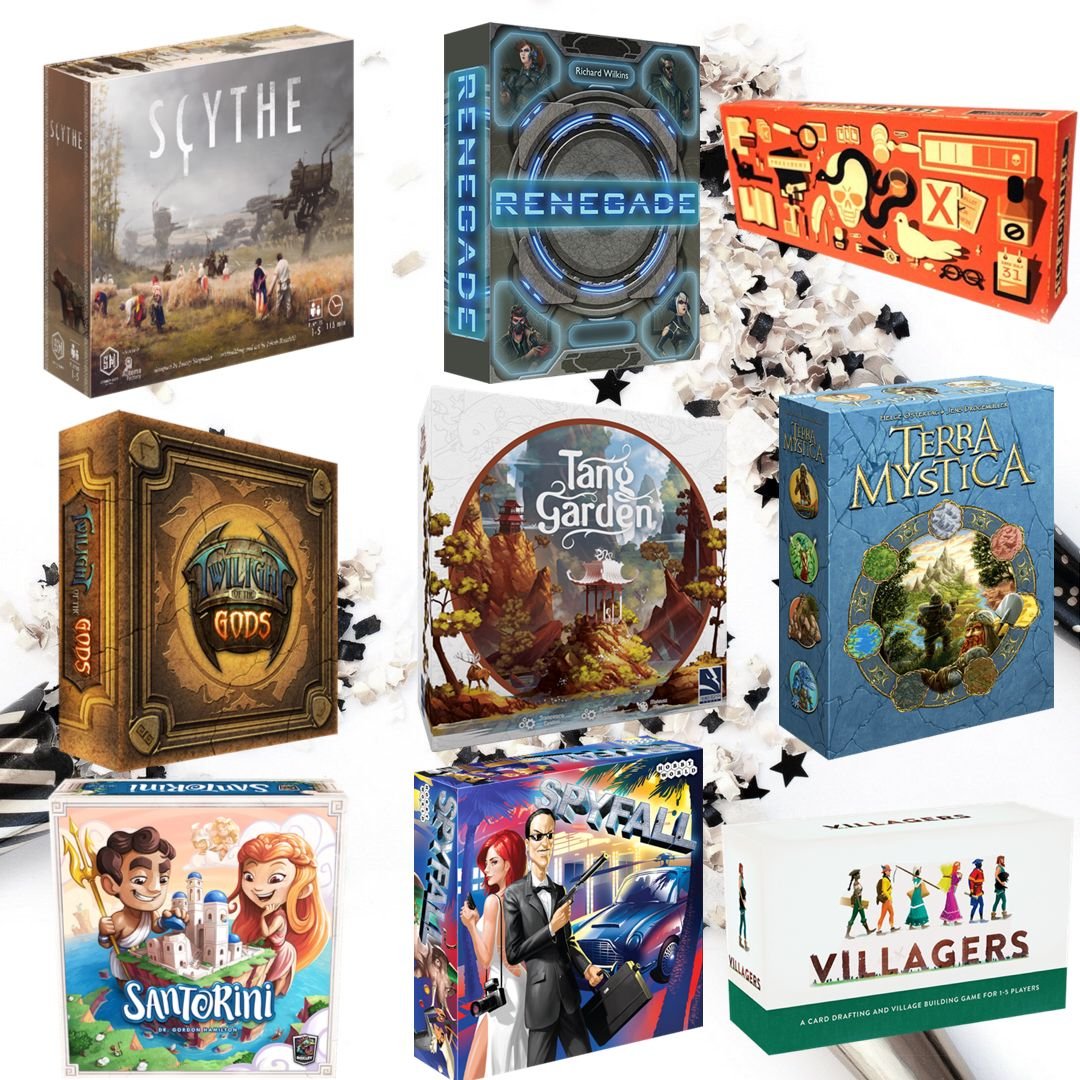 If you want to know how popular these games were in comparison one to another, here is a graph 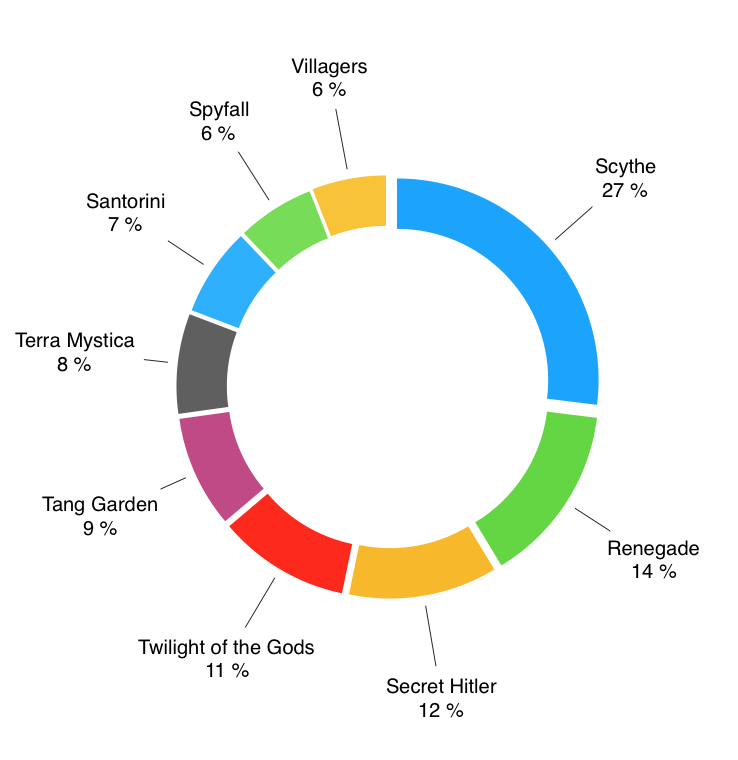 The Most Popular board games on Steam (according to google analytics)

But not only web pages on Tabletopia attract gamers. Sometimes they go directly to the Steam version of the game. In a top 9 Steam list, there is only one newbe - Pulp Detective. 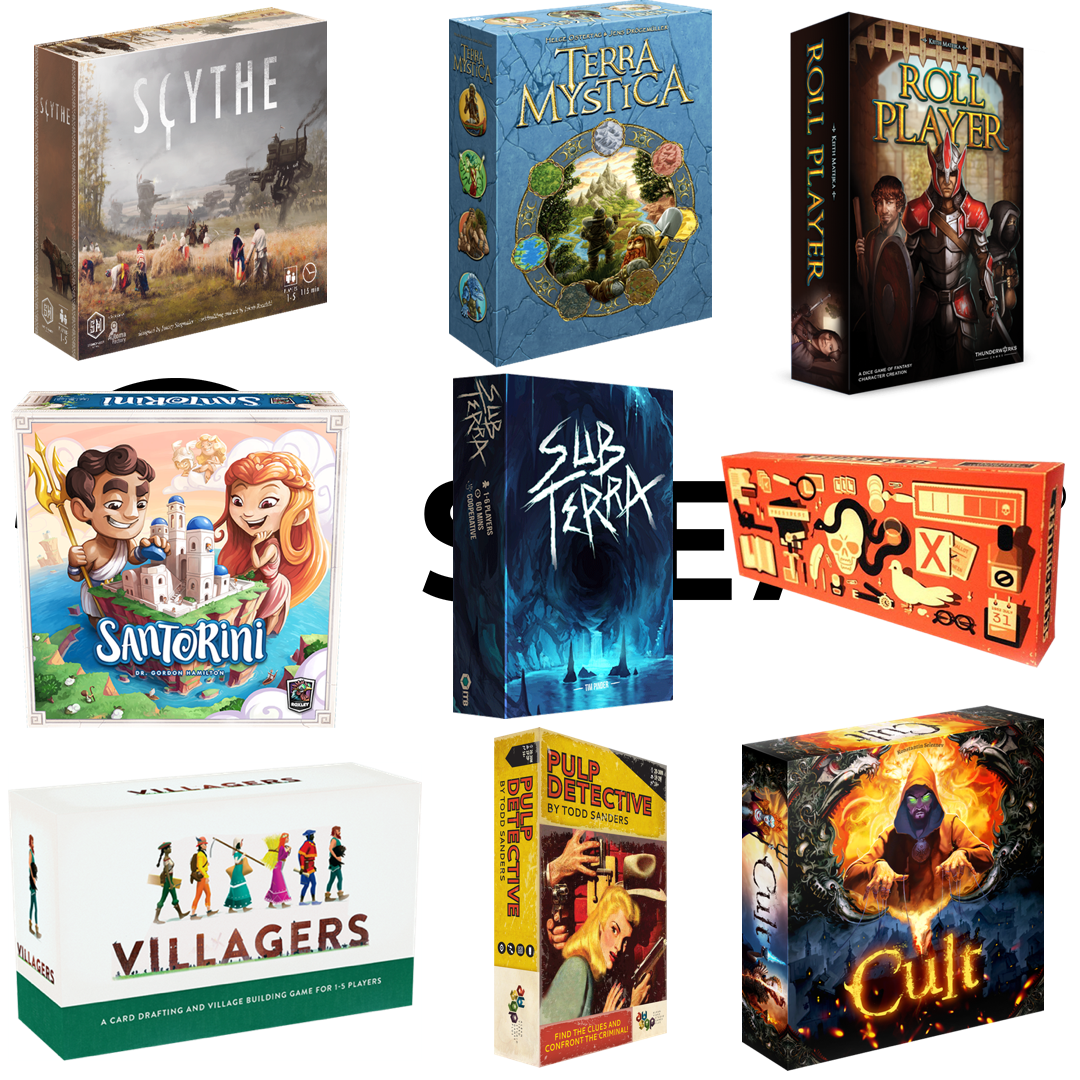 And here is the distribution of visits among these 9 great games on Steam. 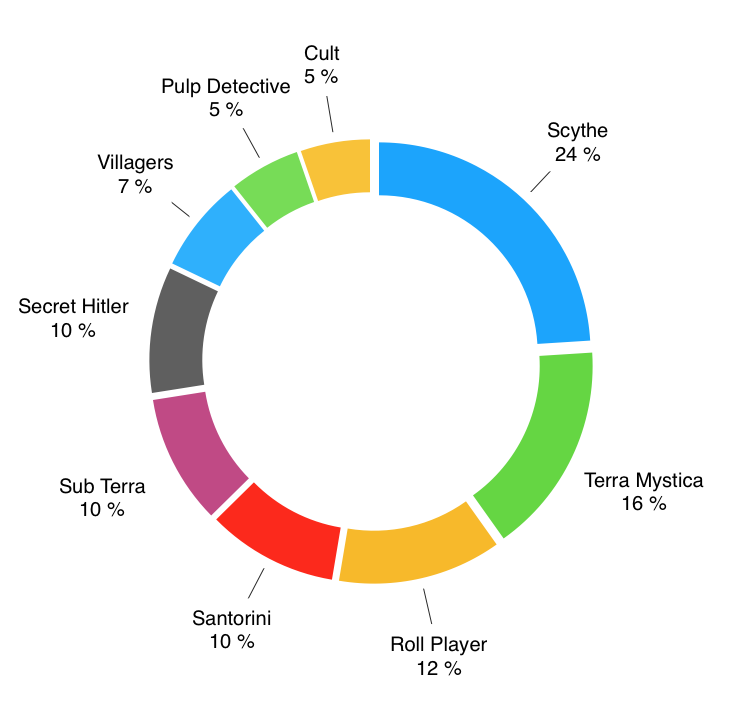 Most popular board game categories

On a web version of Tabletopia, the most visited category was “Free games”. And that was a pretty obvious result, that was followed up by "Solo games" and "New-releases". Then we can see "Kickstarter" and "Top BGG" games. Both categories have huge support from our side as we want to get not only new hot games on our platform but also the most loved games that became the real classics. 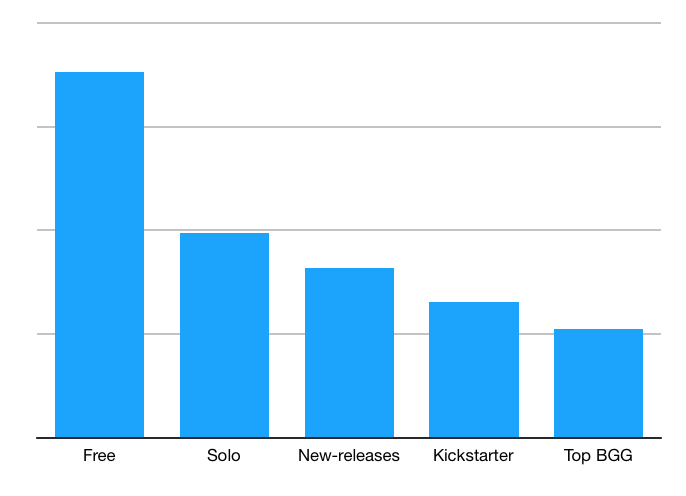 On the contrary, on Steam the first place was taken by "Solo games". And we can see no “Free games” category in the top 5 at all. That’s unexpected for sure. 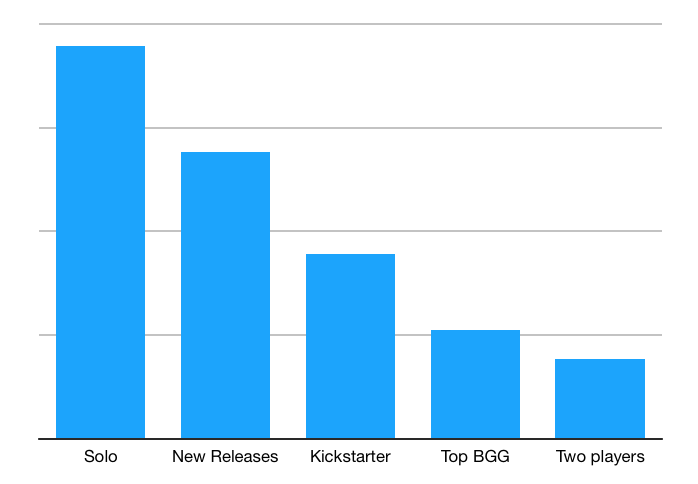 That is all for now. More news coming in 2019. Our team wishes you all the best, lots of great games, new friends and amazing gaming experience!

Have a great year,